For me, my Boeing story begins in the 1940s when my grandfather, John King, began crop-dusting at the age of 15 for local farmers in Iowa. It was then that John began falling in love with aviation.

As World War II began, John enlisted in the U.S. Army and began serving his country, eventually finding his way as a door gunner on a Boeing B-17 Flying Fortress. In the late 1940s and 1950s, John was accepted into the newly formed U.S. Air Force and trained to become a pilot on the B-29 Superfortress, flying a number of sorties throughout the Korean War.

After the Korean War and his discharge from the Air Force, John began working for McDonnell Douglas in St. Louis, Mo. Over the years, he worked on many programs including the Mercury program, Harpoon and F-15, as well as many classified programs that we will never know about.

Following his retirement from McDonnell Douglas in the early 1980s, I remember the days when he would come by the house and pick up my brothers and me to go flying. Hearing the stories from the company he worked for and the wars he served in, and seeing his passion for aviation, I caught the aviation bug and in 1990 went with my grandfather to Oshkosh, Wis., to experience the annual fly-in.

For years now, we have heard the stories, seen photos and wondered about much of John's life. Recently, due to his age (93) and him coming to his last days, we have been going through many of his personal belongings only to find that we have been unlocking history. We have seen his photos, flight logs, acceptance papers for the flight program, first editions of the McDonnell Douglas "Spirit" newsletter and much more.

Two weeks ago, on Nov. 15, 2015, my cousin at the age of 17 completed his first solo flight in honor of our grandfather. My grandfather's inspiration carries on through the family and has influenced my cousin to seek a dual major in college -- Aerospace Engineering and Alternative Fuel Technologies.

Today, I find myself working at Boeing in St. Louis and witnessing still some of the programs John was directly involved in. 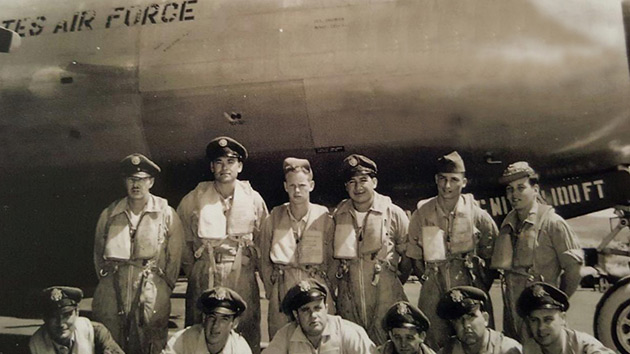 John R.H. King (back row, second from left) with his squadron in front of a B-29 Superfortress.