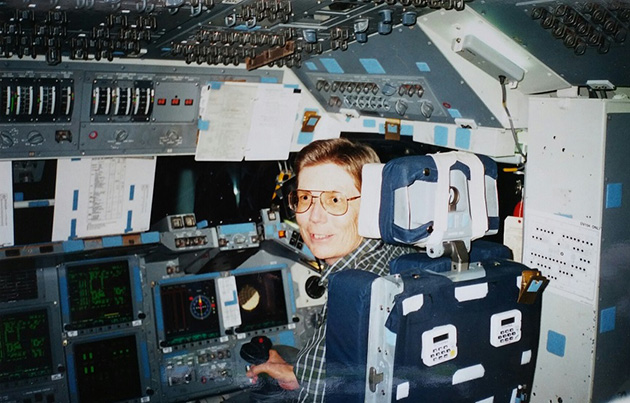 I consider myself extremely fortunate to have grown up in Houston at the birth of the Space Age, circa 1958.

Those were heady and exciting times: The creation of NASA in 1958; the building of the Johnson Space Center and Mission Control; the first American in space; the first U.S. spacewalk, and the first moon landing.

How lucky we kids were to live in Houston. Every time there was a launch, our teachers would herd us into the cafeteria or the auditorium at our school, and would wheel in TVs (black-and-white in the early days; color later on).

We would watch and daydream and draw Mercury Space Capsules while we waited for Alan Shepard to proclaim, "Let's light this candle," in April 1961.

We held our breath when John Glenn's orbit of Earth was cut short in February 1962 due to a possible loose heat shield.

We watched in wonder as we were shown fantastic color footage of Ed White's spacewalk high above Earth, in the summer of 1965.

And of course, how could anyone who was there not be awestruck to listen to Frank Borman, Jim Lovell and Bill Anders read from the Book of Genesis as we saw Earth rise above the horizon of the Moon, showing us our "tiny blue marble in space" for the very first time on Christmas Eve 1968. Wow.

By the time the Apollo 13 incident rolled around, what had now become routine to most people was still fun and exciting to those of us in Houston. And, of course, "failure was not an option."

By 1975, when I enlisted in the U.S. Navy, the heyday of the 60s and early 70s was pretty much over. Yes. Skylab was in orbit and the Space Shuttle Program was on the drafting boards and just over the horizon, but it wouldn't be the same as those early days of "The Right Stuff" or "the fastest man alive."

As fate would have it, I happened to be working on the X-32 Joint Strike Fighter Program at Boeing in Seattle when an opportunity came along to work on the International Space Station (ISS) in Clear Lake City, Texas, just south of Houston.

I started working on the ISS in December 1998, the same month that the first two modules of the Space Station were launched by the U.S. and Russia and joined together. Later I would transfer to Boeing's subsidiary United Space Alliance to work on the Space Shuttle Upgrades Program.

Now, even those days have come to an end. The Shuttle has been retired and a new generation of spacecraft and astronauts will take their place to continue the manned exploration of the moon and Mars.

My hope is that today's kids will continue to appreciate the excitement and allure of the space program, follow its advancements, and become the NASA astronauts and Boeing engineers and technicians of tomorrow. Times will change. The technology will change. But there will always be opportunity. And there will always be the need for the "right stuff." One can only hope and dream.