The 30-year Boeing watch ... my father-in-law's most prized possession. He wore it every day and passed it on to my husband, who will pass it on to our son. It is as reliable as a Boeing airplane and a Boeing engineer -- still works precisely after all these years.

The inscription on the back reads:
J.C. BAER
IN APPRECIATION OF
30 YEARS LOYAL SERVICE
THE BOEING COMPANY
1974

But the story behind the watch is far more than that.

Can you love a job for over 30 years? Can you love a company that long? Can your co-workers be your friends and neighbors? For my father-in-law, Jerry, yes.

Jerry started as a young Boeing engineer at age 20. He moved to Seattle from Wisconsin, and he worked on the 707, 727, 737, 747 and AWACS, among other aircraft during his years at Boeing. He was engaged to Pinky within 10 days of meeting her, and 30 days later they were married. They celebrated their 60th wedding anniversary in 2006.

His job as an engineer took him to places like Japan, Iraq, the Philippines and Thailand. We have photos of him playing golf with T Wilson, who later became the CEO of Boeing. In 1945, he and T Wilson worked on an airplane together. According to Jerry, he was the best CEO Boeing ever had. Back then, you didn't take Boeing customers out to dinner; you brought them to your home and they dined with your family, like when the president of Lufthansa Airlines sat with Jerry and his four children and Pinky served one of her famous rib roasts.

Every day, Pinky packed Jerry's lunch and he would leave with a car full of engineers to Renton; the early pioneers of carpooling. On their lunch hour, they had a running club -- not the most fashionable group of runners, in everything from swim trunks to sweats to plaid shorts … we have a photo with them in the same brand of sneakers.

Fourth of July was always fun because Jerry and his engineer friends would spend weeks preparing fireworks displays in the backyards of their modest ranch-style homes for a pyrotechnic show.

When it was time to retire, the engineers never really did retire. They moved on to something else where they could productively use their skills for the good of someone or something.

Jerry and his fellow Boeing colleagues worked with the U.S. Bobsled Foundation, perfecting the drag on the Olympic bobsleds in the borrowed Boeing and University of Washington wind tunnels. The retired engineers hosted the athletes at their homes and shared the expenses of the low-budget sport.

Then, he devoted his time to Bellevue Public Schools mentoring math students, in particular girls who wanted to pursue engineering, for which he received a Seahawks Community Service Award.

You rarely hear about anyone spending 30 years at a company anymore. Like Jerry, his colleagues at Boeing lived and breathed Boeing.

We all wear the watch for good luck because it does just that: It never stops working, brings hope, is filled with love and reminds us that loyalty truly is a virtue. 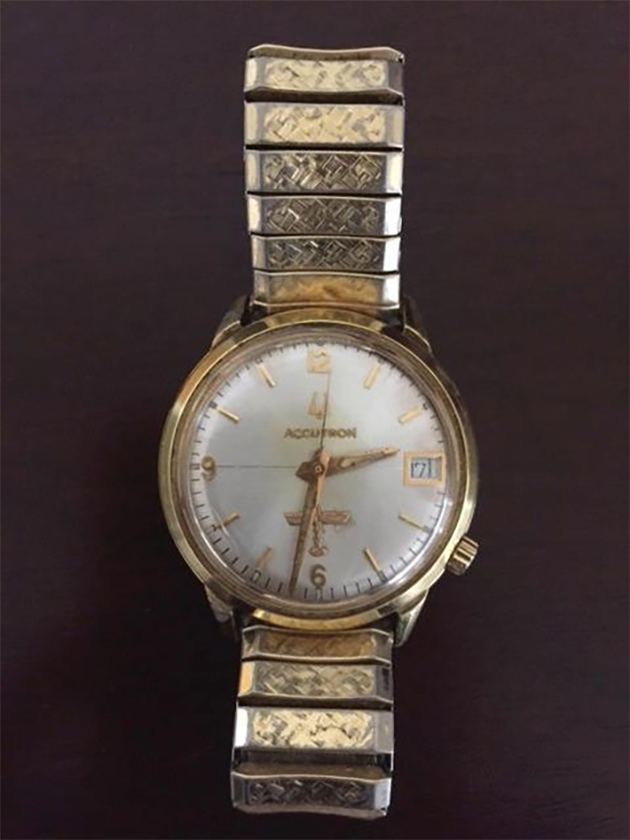 The watch awarded to Jerry for 30 years of service to Boeing.