In 2007, I was senior manager of the Maui Space Surveillance Complex Observatory, which is located 10,000 feet above the Hawaiian island of Maui on the Haleakala volcano. I also volunteered at Kamehameha Schools, where my wife worked as a high school teacher.

During one of my class presentations about the space telescope complex and directed-energy equipment, another teacher told me about Parker, a 9-year-old leukemia patient in California who wished to one day tour the observatory. After learning more about Parker and his family, I worked with one of the U.S. Air Force officers to secure approval for the tour.

With the disease in remission, Parker and his family made the trip to Maui from California for a special tour that was arranged by Boeing in conjunction with the Air Force.

The Maui Space Surveillance Complex (MSSC) Observatory is an Air Force-owned, deep-space observatory that hosts a suite of electro-optical sensors (telescopes) and directed-energy (laser) equipment. Boeing was the Air Force's prime contractor providing research, development and infrastructure services at the site. MSSC is home to the Department of Defense's largest telescope -- it has a deformable mirror that spans 3.6 meters in diameter. Parker was able to see firsthand what the massive telescope is capable of doing.

My colleague, Tom, a Boeing senior telescope operator, and I gave Parker's family a complete tour of the entire observatory -- including, of course, the famous 3.6-meter "Shake & Bake." This is a demonstration of the telescope's agility that allows MSSC operators the physical ability to optically capture and track all items of interest that are in orbit around Earth.

It was clear from his questions about telescopes, space, astronomy and asteroids that Parker had a passion for this subject. Parker left the observatory with a bag full of Boeing souvenirs and memories of a wish fulfilled. He and his family expressed their gratitude to the MSSC team.

Parker, still in remission from leukemia, is now a senior in high school. Our team wishes him the best in what might be a future career in astrophysics or directed energy! 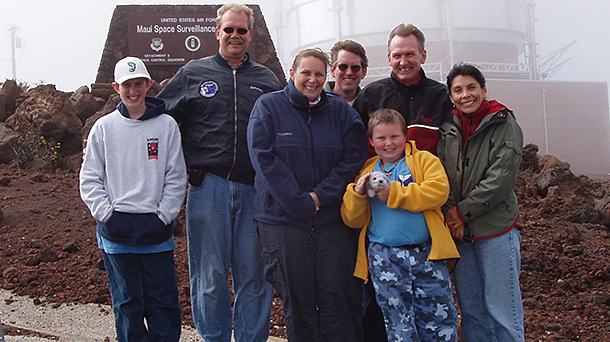 Parker, wearing a yellow jacket, is joined by friends and family in 2007. The MSSC 3.6-meter telescope is in the background.