My Boeing story begins in 1921 when my great-grandfather, James Alexander Duke, began his nearly 40-year career with a company he loved working for. Born in Dundee, Scotland, he was an aeronautical inspector for the British Air Ministry in Edinburgh. While in Vancouver, B.C., he read an article of Boeing needing men.

My great grandfather had an interest in traveling to New Zealand and South Africa and, following a hunch that the greatest development of aircraft would occur on the West Coast, at age 34 he started with the Boeing company shortly thereafter. It would be one year before the rest of his family would join him in his new hometown of Seattle after crossing the pond on a ship called Cameronia.

In addition to many keepsakes and mementos, such as photos of himself and then-president of Boeing, William Allen, at his retirement and personal photos of the prototype 299 Flying Fortress in 1935, he had numerous service awards and achievements to his name. One of his last achievements was "crossing the pond" to Friockheim, Scotland, for his second and last time before his death in 1972. His hometown of Arbroath wrote in their local newspaper, "The Returned Immigrant Visiting From the USA." The article told of his leaving Scotland to pursue his career with the mammoth Boeing Company.

As a child, my grandmother would tell that my father's family was from "across the pond." Innocently, when asked in school where I was from, I stated, "across the pond," as if this were a real place rather then a reference to crossing the Atlantic from Scotland.

My great-grandfather was very proud of his career with Boeing. He loved his work and the employees. Great-grandfather Duke's legacy continued with his two sons down through four generations at Boeing. A very special thank you to my aunt, Margaret Duke Battin, for keeping these memories and mementos so they may be shared in his name in the Boeing Archives. I have enjoyed growing up with these stories and hope to continue sharing them for generations to come. I am proud to be Mr. Duke's great-granddaughter. 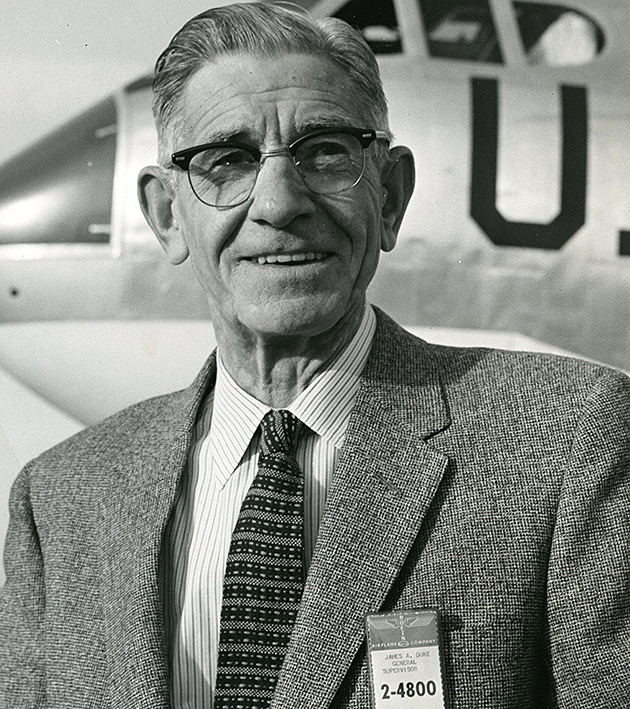