There's no view quite like it. Perched on the open back ramp of a Royal Air Force Chinook flying through mountains into Bosnia, I got an unforgettable opportunity to photograph a second Chinook behind us in the sunshine.

I was on a reporting assignment in 1996 covering British forces supporting peacekeeping in the Balkans, and this was a special trip for me. The crews taking me into Bosnia were based in the United Kingdom at Odiham, where I grew up and learned to fly. My father was a crewman on helicopters there so I knew one of the flight crew, while another saw my name badge during the flight and told me that my dad had trained him. So I was all the more committed to doing a good job documenting their work.

The flight was exhilarating. Just taking off in a helicopter never fails to impress, and the giant Chinook's twin rotors produce a powerful thud that vibrates through your whole body.

We took off from the beautiful Croatian coast and climbed through the mountains, flying low through the passes and, with the rear ramp open to the elements, the ground raced away below us, looking close enough to touch.

The view was amazing; with the other aircraft flying in formation and a backdrop of snow-capped mountains, it was a fabulous day to take pictures.

Before we descended into Bosnia, the crew told us that the Chinook behind would test its antimissile flares, which always looks dramatic. With safety harness on, I perched on the ramp, whipped by wind and noise, camera ready, waiting for the countdown. Over the headset the trailing crew announced "3-2-1 -- go!" and a flurry of bright white burning flares shot out in arcs from the aircraft. I was shooting furiously for what I hoped would be a cover image.

This was back in the days of film. Once the flares were done, I hit rewind, waited, then went to reload. But with all the noise, activity and vibration, I hadn't noticed that the film didn't rewind. When I opened the camera back, the film was still there -- now likely ruined.

We flew on down into the valleys of Bosnia, into miserable cold, wet weather and low visibility, carrying supplies for the forces and civilians. Throughout the trip to various units and outposts, it was clear the crews loved the Chinooks for their reliability and load and flying capabilities, but more importantly, they were essential for the troops and beleaguered communities. The roads were deadly, and toward the end of my visit, we flew over disputed territory where farmhouses were burning, highlighting the continuing danger.

When I got back home I found a few shots had survived. In the end those weren't the best, but they're still my favorites and they sit on my desk at Boeing, where I now work.

The photos remind me of the great work and professionalism of our military, often in incredibly difficult circumstances -- and also that it's important to take care of the details when you work, especially when there's a lot going on around you! 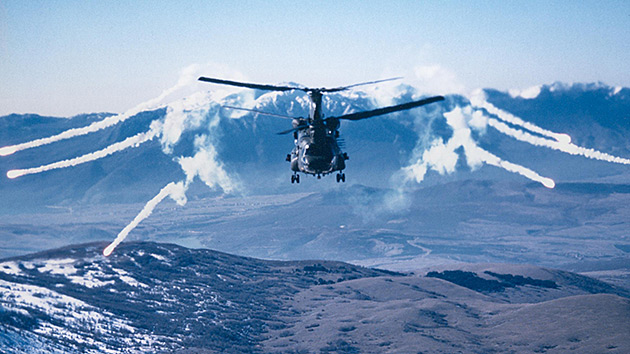