The newest member of the 737 MAX family — the 737 MAX 9 — completed its inaugural flight Thursday, landing at Boeing Field south of Seattle after lifting off 2 hours, 42 minutes earlier from nearby Renton Field into partly cloudy skies.

"I’ve been on the program since the very beginning," said Tracy Russell, a procurement agent for 737 MAX fuselages, "and watching the suppliers and us all come together to get the MAX out flying is just amazing.”

Tom Duval-Wilkinson, a Lean practitioner who works to streamline the MAX build process, said, "It came together well, it is designed well, and the whole team came together and got it flying.”

Piloted by Capt. Christine Walsh and Capt. Ed Wilson, the airplane took off at 10:52 a.m. Pacific time from Renton, near the factory where employees assembled the airplane. It landed at Boeing Field at 1:34 p.m.

First flight is the latest step in the airplane’s thorough flight-test program, which will be followed by first delivery in 2018.

Watch video of the takeoff via the replay on Boeing’s Facebook Live stream.

The 737 MAX 9 debuted to the world on March 7. Since then, teams have been performing systems checks, fueling and engine runs on the flight line in preparation for first flight.

Veronica Wipp of 737 MAX business operations, who was on hand for the takeoff, said, “This airplane is fuel-efficient, beautiful inside and out, and customers are going to love it.” 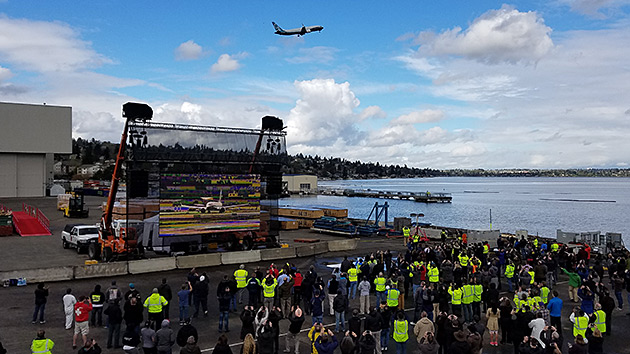 Employees in Renton, Wash., watch as the 737 MAX 9 takes to the skies above Lake Washington for its first flight on Thursday.

The 737 MAX 9 cruises over the Pacific Northwest region of the U.S. during its inaugural first flight on Thursday.