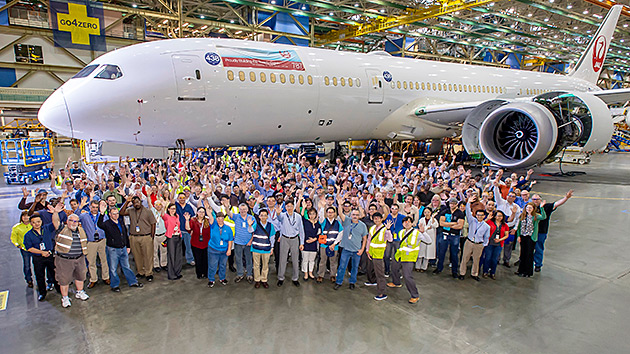 Boeing’s site in Everett, Wash., to celebrate the first 787-9 to be built at the new rate of 12 per month. The second airplane at the new rate is being built in North Charleston, S.C.

Accelerating production rates once again, the 787 program recently rolled out its first airplane at a new rate of 12 airplanes per month from its Everett, Wash., factory.

The second airplane at the new rate is being built in North Charleston, S.C. The 787 was the Boeing record-holder for twin-aisle production at its former 10-a-month rate. The latest rate establishes a new Boeing and industry record, according to company officials.

During an event celebrating the milestone, Kim Pastega, vice president of Production Systems Operations, spoke about her pride in the people behind the achievement.

The first airplane built at the new rate is set to be delivered to Japan Airlines Co. Ltd. (JAL). Representatives from JAL recently visited Everett to see their 787 roll off the production floor and to meet with the teams that built it.

“This is very amazing for me,” said Takeshi Katsurada, JAL’s vice president of Engineering and Quality Assurance. “You are all important to our success, and I appreciate your commitment to high quality and being on time.”

Set for delivery later this month, the airplane will be JAL's 28th 787. For the 787 program, it represents the next step in achieving a rate of 14 airplanes per month by the end of the decade. 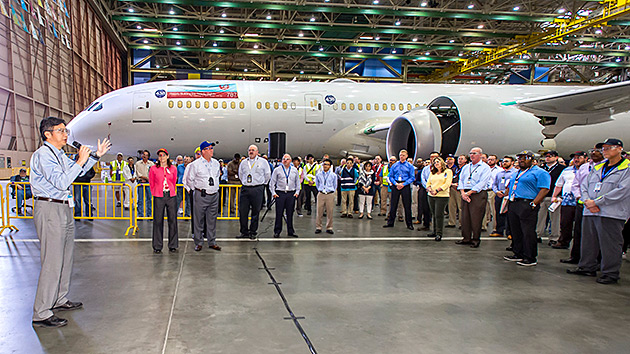 Takeshi Katsurada, JAL vice president of Engineering and Quality Assurance, congratulates the 787 team on its rate-break achievement in Everett, Wash.