Boeing and the University of Washington recently celebrated their new collaborative research lab at the university’s Seattle campus.

The Boeing Advanced Research Center (BARC) opened its doors this week with tours of the 4,300 square foot lab space and several demonstrations of the center’s capabilities. The center will facilitate joint research between Boeing and the university, initially in the areas of advanced assembly and manufacturing technologies.

On hand to usher in the new center were Boeing Commercial Airplanes President and CEO Ray Conner, Washington Governor Jay Inslee, University of Washington President Michael K. Young, and other leaders from Boeing and the university.

“We’re pleased to strengthen our long-standing partnership with the University of Washington and look forward to working side-by-side with students and faculty on the cutting edge challenges of our industry,” Conner said. “It’s another example of how our investments in the Puget Sound are a win-win for the region and Boeing. When our community is strong, we are strong.”

“Both the University of Washington and The Boeing Company are tremendous drivers of innovation in Washington,” Inslee said. “Partnerships, like that being announced today through the formation of the Boeing Advanced Research Center, will ensure our students have the skills needed to compete and win in the future. I am excited to watch the next generation of aerospace leaders take flight here in Washington State.” 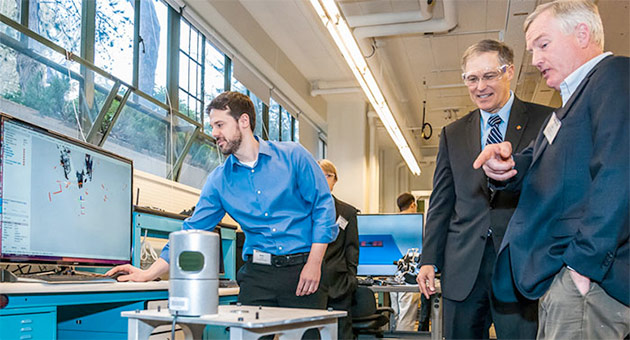 Jim Buttrick (right), a Boeing engineer and the associate director of the Boeing Advanced Research Center at the University of Washington, describes the workings of a mobile vehicle equipped with multiple sensors to Gov. Jay Inslee of Washington.

Boeing engineers from Boeing Research & Technology, the company’s advanced R&D organization, and Commercial Airplanes will lead research projects and work alongside a team of university graduate students and faculty.

Having Boeing engineers in the same physical space working with students and faculty is very exciting, said Per Reinhall, UW professor and chair of the UW’s mechanical engineering department and director of the new research center.

“We get to have some of the most significant airplane manufacturing and design issues come through this lab,” Reinhall said. “It supports an exciting new trend in education where students learn by doing, along with close interaction with industry.”

The new center’s current projects are funded by BR&T and will initially focus on four aircraft assembly projects in the areas of automation, robotics, mechatronics and metrology, including development of in-wing crawlers, inside fuselage automation for percussive rivet forming, and sensor fusion. This type of research will help accelerate manufacturing technology into the production cycle, said Jim Buttrick, a BR&T engineer who serves as BARC’s associate director.

“We strategically chose projects where we want to solve a problem, but we see there are areas where we can employ academic talent to work portions of a project and come up with viable solutions,” Buttrick said. “It will give us a fresh perspective and enhance our ability to innovate.”