When Michelle Carey came through Everett’s paint hangar doors and saw the 787 Dreamliner with a special livery for first time, she cheered.

Carey was one of a handful of Boeing team members who got a sneak peek at the Dreams Take Flight 787 Dreamliner, which highlights the work of the Employees Community Fund of Boeing.

Since 1948, the Employees Community Fund of Boeing (ECF) has funded approximately $1 billion to local communities across the United States. By giving small amounts and pooling their funds, Boeing employees and retirees have been able to maximize their impact to nonprofits.  Approximately $630 million of that total has supported Washington state organizations.

Now thanks to the 787 Dreamliner program, Boeing’s community-building employees are being recognized in a whole new way. The 787-9 will premiere at a community event soon. The airplane is wrapped with cutting edge technology – literally. It’s the first time Boeing teams have placed a full body decal onto a composite airplane.

That decal offers a colorful canvas of purples and pinks, including emojis symbolizing charities and nonprofits that have been helped by the Employees Community Fund. Tens of thousands of employees have contributed to the ECF since its inception back in 1948.

“It’s something that any employee can be touched by,” Carey said. “For me, personally, they gave to Martha & Mary in my hometown of Poulsbo, Washington, which gave money to enable them to have a van to transport their patients in a hospital bed … something my dad needed on his last days of life fighting cancer. So, for me to be a part of that – I’m so proud.”

Rim Benoud-Schmitz, who first started her career as an industrial engineer on the 787 in Everett, has been an ECF donor for the last five years. She was one of those donors who had the chance to get a first glance at the Dreams Take Flight airplane.

“It’s just gorgeous,” she said. “To see it painted with the ECF livery really makes me proud to be a Boeing employee.” 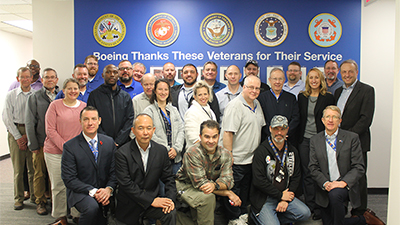