The Seattle Seahawks hosted Boeing Day at training camp on Sunday, Aug. 11. The morning practice session gave more than 1,200 employees and their guests a first-hand look at the team, days after its preseason win against the Denver Broncos. Tickets were shared with leaders from a variety of programs including Fabrication, 777 and 737. The leaders and their teams then selected employees for the honor based on special contributions to company priorities like safety, quality and business performance.

Boeing and the Seahawks also jointly announced community organizations that will participate in the 2019 Legion of Youth Powered by Boeing program, which provides young men and women affiliated with local youth organizations the chance to bring family members and mentors to a Seahawks game in order to reinforce the concepts of teamwork and community service.

“We’re proud of what we do at work and in the community,” said Anthony Ewald, who works in Equipment Services in Everett. “It’s great that our partnership with the Seahawks lets us do this. I feel lucky to be part of it and I got to see the players up close, really eye-to-eye.”

Leeah Brown, who works on the 737 program, sees Legion of Youth Powered by Boeing and other philanthropic efforts by the company as a chance for Boeing and its employees to give back. “Boeing employees look out for their neighbors; it’s what we do. You have to pay it forward.”

Brown brought her nephew, Xavier Townsend, along for the day to see the team they both root for. He had the opportunity to ask several players to sign a small football and a jersey and commemorate the day. “We’ve been fans for some time,” Brown said. “We’re giving the team good vibes for an awesome season.”

Nikki Davis, a Manufacturing Engineer at the Renton site, was also excited to see the Seahawks preparing for what looks to be a promising season. “It’s awesome to watch the new guys and get to know them and see the veterans up close. The team looks good.”

Nathan Hatch, a painter at Boeing Field, couldn’t agree more. He brought a childhood friend with him to share the day. “We played football together as kids, so it just made sense. This is one of the best days ever.” 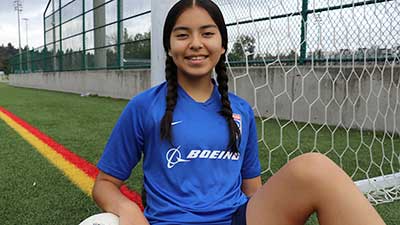