Teamwork was the order of the day as thousands of enthusiastic Everett, Wash., employees in blue-and-green jerseys — and a few cases, spiky blue wigs or colorful face paint — cheered, clicked photos and drew “winning together” inspiration during a recent visit by members of the championship-winning Seattle Seahawks.

“I will never forget this experience,” said J.J. Jenkins, a team lead on 767 Body Structures, who was glowing after introducing linebacker K.J. Wright, who hails from Jenkins’ hometown in Mississippi.

The admiration was mutual as Wright, defensive tackle Brandon Mebane and defensive end Cliff Avril — fresh from a tour of the Everett factory — expressed amazement at Boeing’s technology and innovation. They said aviation plays a big role in their ability to do their jobs as athletes, including flying to games around the country. 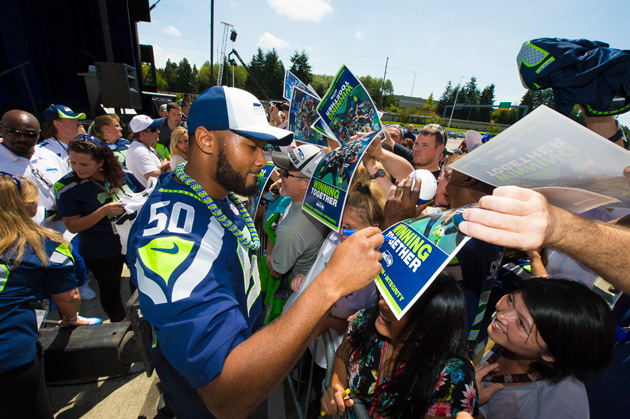 “Your jobs are very important to a whole lot of people in the world,” Mebane said, “and I would like to personally thank you for that.”

It was a high-octane kickoff to a week of Seahawks celebrations at three of Boeing’s Puget Sound sites. One week after the visit to Everett, Boeing Fabrication brought commercial and defense employees together at the Thompson site — adjacent to Boeing Field in Seattle — which works on the P-8, for a rally starring wide receiver Jermaine Kearse, linebacker Bobby Wagner and linebacker Brock Coyle. Events wrapped up that day in Renton, home of the 737.

Just 24 hours earlier — back by popular demand — Boeing unveiled a 747-8 Freighter painted in an updated Seattle Seahawks livery. It is similar to one Boeing created in January 2014 to celebrate the Seahawks in the lead-up to their Super Bowl XLVIII victory, and it will fly in a few weeks during the Boeing Seafair Air Show over Lake Washington.

With Blitz the team mascot, Blue Thunder, the team’s drumline, and Sea Gals cheerleaders setting the tempo at all three events, players remarked on how much teamwork and cooperation go into both winning football championships and building airplanes. “We are all dependent on one another to get the job done,” Mebane told employees. 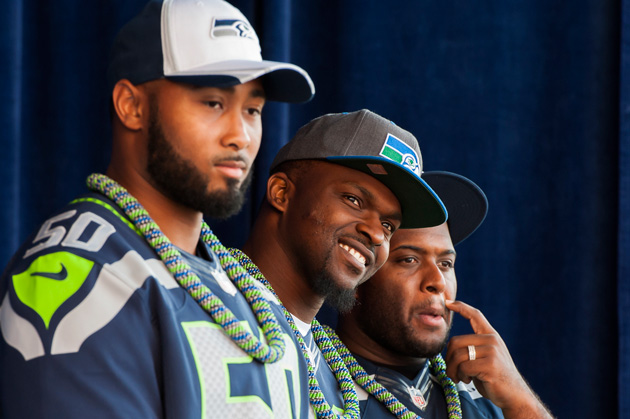 “To be a winner,” added Wright, “you have to be a good teammate — to help each other out, to share your knowledge.”

That point was not lost on Boeing employees, who saw the parallels between competing and winning football games and winning in the aviation marketplace.

“Working together is important, helping each other stay safe,” said John Bernatz, 737 Environmental Health and Safety. “If a player is injured, you are not going to be able to win. When someone is hurt, it affects everyone.”

Valerie Kobe, executive office assistant on the KC-46 tanker program, said, “I was inspired when Bobby Wagner was asked about the team reaction to the (2015) Super Bowl loss. He said it just made the team want to work harder and better. I think that’s what we do here too. When we miss the mark, we ask ‘how do we do better?’

Michaela Byram of Portland, Ore., one of 500 Boeing Fabrication employees bused to the event from other Northwest sites, said, ”What our Boeing team goes through is not much different than the Seahawks as they prepare for a game. It’s all about keeping your head in the game, staying focused, working together as a team.”

By John Flick and Cecelia Goodnow 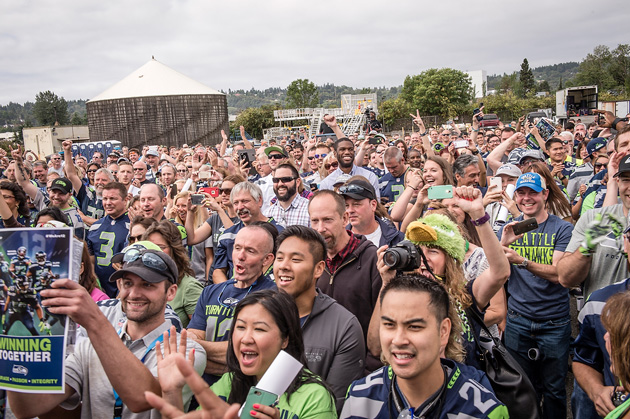