Numbers can tell a compelling story, but not the whole story.

The 2000th Apache attack helicopter to come off the production line in Mesa, Ariz., strongly supports the enduring value of the helicopter to the customer. Talking with teammates engaged in producing the helicopter offers a bit of insight into what the Apache means to those who build it and to the warfighters whose lives depend on it.

Working to assemble connector in the crew stations of the new AH-64Es, the 2000th Apache serves as validation for Boeing employees in Mesa like Jessica Ferguson.

“That’s a lot of aircraft, we must be doing something right,” the Apache Manufacturing Technician said, smiling broadly as she gave thought to 2,000 helicopters making their way through production and on to deliver to allied defense forces around the world.

Check out the video to see Ferguson at work and the Apache in action.

The second video is what it’s like to fly the Apache from the perspective of Boeing’s recently retired chief test pilot for Vertical Lift aircraft. 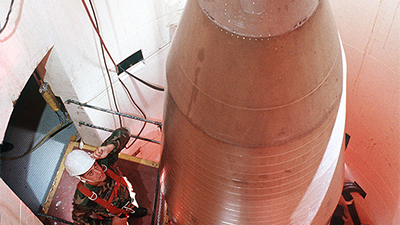 50 years on alert: By the numbers