What started as an idea on paper just two years ago is now the largest spacecraft welding tool in the world. Boeing and NASA celebrated with suppliers, partners, and community leaders from around the region at the Michoud Assembly Facility in New Orleans last week, unveiling the Vertical Assembly Center (VAC). The 170-foot-tall, 78-foot-wide giant completes the unique tool set that will be used to build the core stage of America's next great rocket, the Space Launch System (SLS), which will send humans and cargo out of Earth’s orbit. The ultimate destination – Mars.

“This is the tool that will weld together all the rings, domes and barrel sections that will form the core stage of the SLS rocket,” said Patricia Key, SLS lead tooling engineer for Boeing.

The core stage will tower more than 200 feet tall (61 meters) with a diameter of 27.6 feet (8.4 meters), and is designed to store cryogenic liquid hydrogen and liquid oxygen that will feed the rocket's four RS-25 engines. The 70-ton Space Launch System will stand 321 feet tall, provide 8.4 million pounds of thrust at liftoff, weigh 5.5 million pounds and carry 154,000 pounds of payload.

Patrick Whipps, NASA resident manager at the Michoud Assembly Facility, said the core stage is the backbone of the SLS. “This is the most powerful rocket that will ever have left the Earth, and that will give us the capabilities and payloads that enable us to do things that mankind has never done before in space,” said Whipps.

Boeing, under contract with NASA to design, develop, and manufacture the SLS core stages and avionics of SLS, worked for more than two years to prepare the facility to manufacture the largest rocket ever built. Work among other NASA industry contractors also continues on the engines, boosters, and ground systems.

NASA officials also recently announced they have completed a rigorous review of the Space Launch System -- the heavy-lift, exploration class rocket under development to take humans beyond Earth orbit and to Mars -- and approved the program's progression from formulation to development, something no other exploration class vehicle has achieved since the agency built the space shuttle.

Watch the video to learn more about the VAC and SLS. 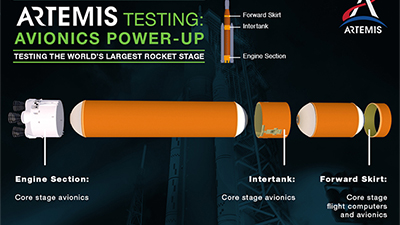