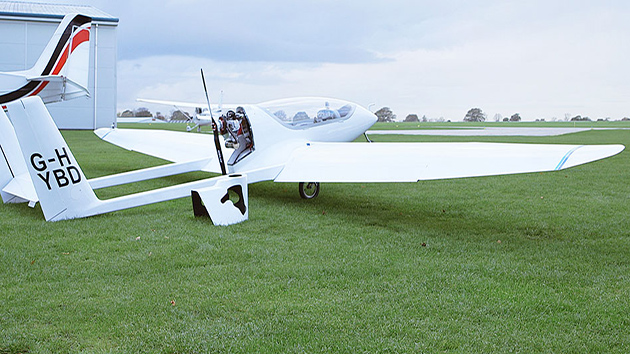 A small experimental airplane powered by a hybrid electric engine propulsion system recently completed flight tests in the United Kingdom. The project was sponsored by Boeing.

A small experimental airplane recently took to the skies near Sywell Aerodrome near Northampton, United Kingdom, for an important test flight. But unlike the other airplanes at the airport, this single-seat airplane was powered by a hybrid electric engine propulsion system that uses a combination of traditional fuel and electricity.

The project, led by the University of Cambridge and sponsored by Boeing Research & Technology, the company's advanced R&D organization, celebrated a major milestone recently after a series of successful flights. A video highlighting the project is available on the university’s website.

“It’s really exciting to see an airplane in the sky using some of the technology that could one day be a vital part of aviation and improve our industry’s environmental performance,” said Bradley, who provided guidance to the Cambridge team.

Unlike traditional engines, the hybrid electric propulsion system used in this flight test consisted of an internal combustion engine and an electric motor/generator. Researchers said the aircraft can fly using the engine or the electric motor, or both in combination. The engine can also power the generator that can charge the battery, allowing the airplane to use the electric motor during a later phase of the flight. The team also developed an advanced battery management and state-of-health monitoring system.

Cambridge spent the past three years getting to flight test, during which Boeing provided advice and reviewed the team’s work. It began with studying hybrid electric propulsion for a variety of aircraft sizes from small unmanned aerial vehicles to single-aisle commercial airplanes, which led to development of computer models of the aircraft and power and engine systems. In 2012, the team began design and ground testing of the hybrid power and propulsion system for the experimental airplane.

The project forms part of Boeing’s ongoing engagement with universities around the world, including seven academic partners in the United Kingdom.

“Until recently, (batteries) have been too heavy and didn’t have enough energy capacity,” Dr. Paul Robertson of Cambridge’s Department of Engineering, who led the project. “But with the advent of improved lithium-polymer batteries, similar to what you’d find in a laptop computer, hybrid aircraft – albeit at a small scale – are now starting to become viable.”

For Boeing, this project builds on years of extensive research and testing of innovative propulsion technologies. In recent years, Boeing has completed a series of fuel cell demonstrator flight tests, and recently wrapped up a NASA study that identified hybrid electric propulsion technology as having good potential to meet future environmental goals for air vehicles in the 2030 to 2050 timeline. This effort also supports Boeing’s environmental strategy, which states that Boeing will continually research new, innovative technologies to improve the company’s and the industry’s environmental performance.

Now that initial flight tests are complete, researchers are checking data against computer models to set the stage for possible future tests on larger engines and other fuels.

“Our mission is to keep our sights on finding innovative solutions and technologies that solve our industry’s toughest challenges and continually improve our environmental performance. Hybrid electric is one of several important elements of our research efforts. We are learning more every day about the feasibility of these technologies and how they could be used in the future,” Bradley said.