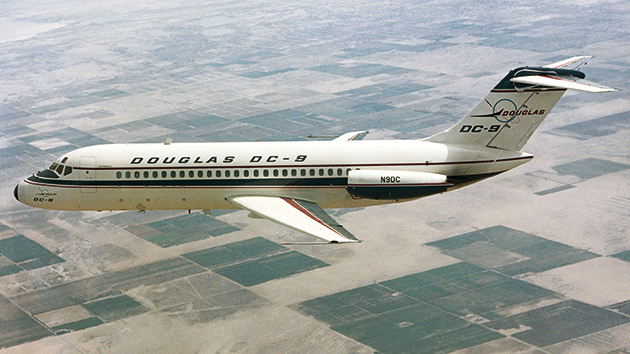 The DC-9 made its first flight in February 1965 and entered service just 10 months later.

The sleek, twin-engine jet, trimmed in red, white and blue, was ready for takeoff at the Long Beach airport in California, idling on the main runway, when Rene Francillon drove up for work on Feb. 25, 1965, and had to wait. The Douglas Aircraft Co. employee couldn’t pass through the gate and reach his office near the runway until the airplane was airborne.

Realizing he was about to witness history — the first flight of the Douglas DC-9 — Francillon did what any serious aviation enthusiast would have considered: He climbed out of his car and watched.

“It was exciting,” recalled Francillon, who worked as a cost analyst. “We all felt it was going to be a success. We all thought it would do well. It was a beautiful airplane.”

Francillon watched as the new jetliner, with pilot George Jansen, co-pilot Paul Patten and flight-test engineer Duncan Walker aboard, lifted off the runway and headed out over the Pacific Ocean until it disappeared from view, eventually landing more than 100 miles (160 kilometers) away at Edwards Air Force Base, Calif.

February marks the 50th anniversary of that milestone at Boeing heritage company Douglas. The distinctive T-tail, narrow-body twinjet would change the way much of America, and elsewhere in the world, traveled by air. Initially designed to hold 90 passengers, the DC-9 introduced jet service — and the jet-smooth ride — to small and intermediate cities that previously relied on propeller-driven piston- and turboprop-powered planes and had shorter runways. Designed to operate from 98 percent of the nation’s primary airports, the DC-9 could fly up to 1,500 miles (2,400 kilometers) without refueling, but typically was used on routes of 500 miles (800 kilometers) or less.

Originally conceived with four engines, the DC-9 was built with two attached to the rear fuselage rather than on its wings. That was one fewer than the three that powered Boeing’s larger 727, which had already entered commercial service. Airlines still weren’t exactly sure what to think about the hybrid Douglas jet. At the time of the Long Beach first flight, the company had orders for just 61 DC-9s.

The DC-9, however, just needed time to introduce itself. Over the next 10 months, 183 jets were purchased. It beat Boeing’s competitor, the two-engine 737, to factory rollout by about two years, and would go on to become the most successful Douglas transport since the DC-3.

Read more in the February 2015 issue of Frontiers.