A line of Boeing 737s, standing beyond the Renton, Wash. factory’s open doors, provided a powerful backdrop for U.S. Secretary of State John Kerry’s speech Tuesday promoting a trade pact between the U.S. and 11 other countries along the Pacific Rim.

The free-trade deal called the Trans-Pacific Partnership (TPP) aims at reducing tariffs and other costs associated with importing and exporting goods from one country to another.

“I couldn’t think of a more appropriate place to visit on my way back from Asia to talk about our nation’s leadership role in the growing global economy,” said Kerry.

Kerry also stressed the importance of reauthorizing the Export-Import Bank to America's success in global trade.

“We are honored that Secretary Kerry chose to come to Renton and speak on the important topic of TPP,” said Pat Shanahan, senior vice president of Airplane Programs.

“As the United States’ largest exporter, this proposed agreement offers significant opportunities for Boeing, along with other U.S. companies, to boost international sales and support well-paying jobs here at home,” said Shanahan.

‎The Secretary paused during his speech for employees to applaud and cheer for Asian carrier, Silk Air’s newest 737-800 taking off for delivery at Boeing Field in Seattle.

“Do you feel like that’s a baby leaving the family?” laughed Kerry.

The Secretary took time to greet and shake hands with 737 employees throughout his visit including 737 flight deck engineer, Jose Fuentes. “It’s good to see him here as the 737 makes history.” 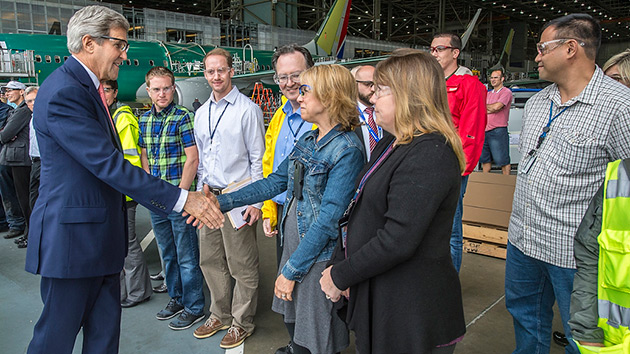