Painters in particular are trading in their paint guns and learning to operate robots that more efficiently and safely meet the stringent painting requirements of the 787's horizontal stabilizers.

“With our increased rates, we had to find a way to avoid rework, which could take an entire day,” said Ian Pierce, a manufacturing engineer who helped improve the process.

“Very tight tolerances in the surface finish make it almost impossible to paint perfectly by hand.”

So far, the robots have painted more than 20 sets of horizontal stabilizers and more than 20 primed multi-spar boxes with 100 percent quality. The robots also accomplish their tasks in about 60 percent less time, Pierce said, citing another benefit:

“There are 100 percent less (paint) fumes affecting the painters, creating a much safer environment," Pierce added.

The move to robots began in part because the Boeing Salt Lake site needed to convert its existing 35,000 square-foot (3,250 square meters) building to support additional 787-9 demand -- without expanding the building.

With the rate increases, employment in the shop has grown and painters now have the opportunity to learn and build additional skills.

Manufacturing and engineering employees explored ways to minimize painting issues through months of tests that involved various temperatures, humidity and other factors.

“The biggest variable was the human element,” Pierce said. “We put together a cross-functional team, including equipment engineering, purchasing, business operations, quality assurance, painters, and manufacturing engineering; and with the assistance of interns from the University of Michigan, we decided to use robots.”

The team visited Boeing paint shops to harvest company knowledge and spent time where the automobile industry has learned to paint with perfection: Detroit, he said.

The information they gathered solidified the decision to pursue automation, Pierce said.

Boeing Salt Lake's painters are still learning the system and how to troubleshoot issues, said Bryan Woodward, a Boeing painter for 10 years. Encore Automation a robotics company in Auburn Hills, Michigan, specializing in paint finishes, was chosen as the on-site integrator for the new process and has representatives on-site to provide training and help.

Woodward, who never worked with robots before, said he sees real advantages in the automated system.

“Ergonomically, it’s great, because we’re not physically doing this work,” he said.

Woodward expects the automated painting system will take variability out of the process and produce consistent, 100-percent quality paint jobs.

“The painters are looking forward to seeing how everything will work," he said. "We enjoy painting and this is a big change, but it’s a good thing and we’re learning different skills.”

“Our goal is to make this work for us and share our lessons with the rest of Boeing,” he said. “Our purpose is to make a better product with less strain and stress on our painters. We want to avoid injuries while producing perfect quality and meeting every requirement the first time.”

Teaming with 'Butch and Sundance'

While Boeing Salt Lake painters learn to use advanced manufacturing tools to paint, mechanics who hand-drilled holes to install fasteners into horizontal stabilizers are teaming up with “Butch and Sundance.”

That's what employees call the "drill and fill" robots they are learning to operate that flank the sides of each horizontal stabilizer. It's a playful nod to colorful Wild West characters, Butch Cassidy – who grew up near Salt Lake City – and the Sundance Kid. Yet naming the robot twins also acknowledges their importance to providing enhanced quality, superior ergonomics and reduced work time.

"Butch and Sundance" use a camera to position, drill and countersink each hole, and measure the panel's diameter and thickness. Their tasks include inserting fasteners, smoothly micro-milling fastener stems to match the skin-panel surface, and inspecting the completed work.

The automated fastener installation cell is now in full production and the team just completed its first production 787-9 horizontal stabilizer multi-spar box. Joshua Carlsen, a manufacturing engineer, said process time has been reduced by 80 percent and rework is virtually eliminated.

“The blind fasteners were being installed by hand, but there was a 20 percent failure rate,” said Carlsen, who with his colleagues and Boeing Research & Technology expert Mark Woods, studied how to improve processes.

With more than 1,000 fasteners in a horizontal stabilizer's contoured surface, there's a high risk of quality and ergonomic issues, he said.

“We wanted a much higher quality installation, along with greater speed to meet our rate requirements," he said. "We needed to make the process ergonomic to eliminate repetitive stress issues.”

The team settled on automation, and its success has opened the door to an expanded work statement.

“This has demonstrated the flexibility of a robotic work cell,” Joshua said. “We may use robots for various applications in the future.” 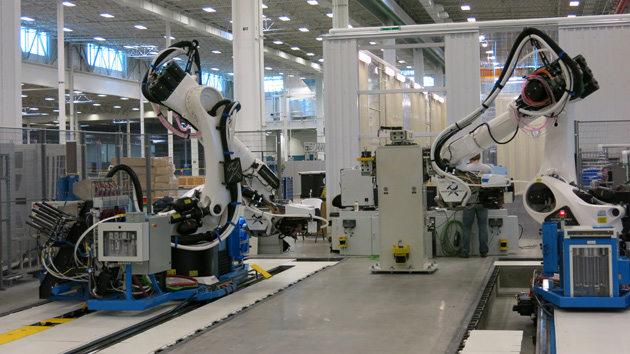 Using robots named Butch and Sundance, teams have reduced the process time for installing fasteners by 80 percent. Because the process quality is consistent with each fastener installation, rework has been all but eliminated at Boeing Salt Lake’s Composite Fabrication building in West Jordan, Utah.