After more than 50 years of service to the U.S. Marine Corps, the CH-46 Sea Knight, affectionately known as the "Phrog," jumped into the history books Aug. 1, with a final flight to the Smithsonian’s National Air and Space Museum, Udvar-Hazy Center. Now HMM-774, the last operational CH-46 squadron, prepares for its future aboard the MV-22 Osprey. Check out a collection of the "Phrog's" photos throughout the decades in our CH-46 Sea Knight "Phrog" Sunset Flickr album. Photos from the sunset ceremony are available in our Farewell to the Phrog Flickr album. 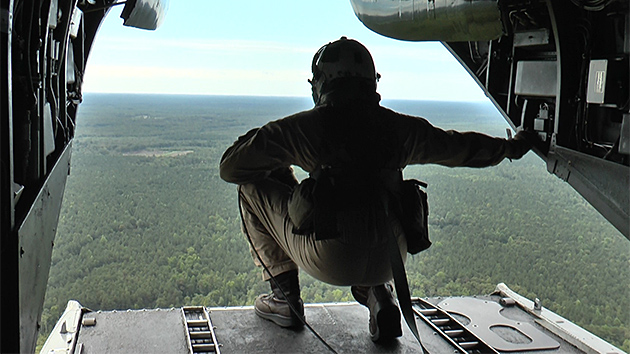 A U.S. Marine looks out of the back of a CH-46 “Phrog” flying over Virginia in one of its final flights before it enters the Udvar-Hazy Center as part of an exhibit at the Smithsonian National Air and Space Museum at Washington Dulles International Airport. 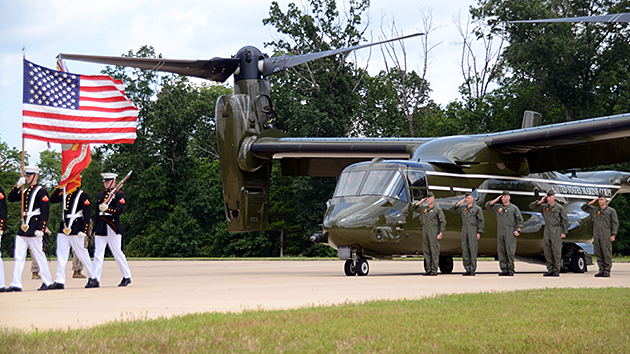 The U.S. Marine Corps Color Guard marches past an MV-22 Osprey operated by Marine Corps Helicopter Squadron One (HMX-1) during the CH-46 passing of the torch ceremony Aug. 1 at the Udvar-Hazy Center in Chantilly, Va.