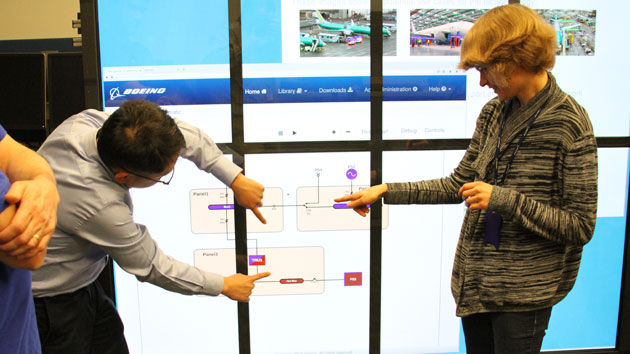 Jan Wei Pan and Rachel Ertl, Boeing Research & Technology modeling and simulation engineers, test a prototype of a visualization at the Center for Applied Simulation and Analytics in Huntsville, Alabama.

Satellites are complex and delicate -- and must work flawlessly the first time and for upwards of two decades thereafter.

Experts at Boeing Research & Technology’s Center for Applied Simulation and Analytics in Huntsville, Ala., are using the power of visualization to perform faster, better testing of satellites. They’re testing earlier in the production process, saving time and money and improving quality.

Known as CASA, the center is helping Boeing teams apply analytics to solve difficult problems on everything from commercial airliners to space programs. The team builds visualizations to inform business decisions using the power of data analytics and advanced software, hardware and a group of world-class data analytics experts.

On satellites, for example, traditionally Boeing’s Satellite Development Center in El Segundo, Calif., used a Modular Test System in the factory to test satellite components and assemblies to prove they work as expected. That testing required completed satellite assemblies, and was done at the end of satellite production. However, any issues could be more readily addressed if they are identified early during the drafting and design phase.

By the end of this year, that testing will be done long before the satellite is near completion, courtesy of a virtual test tool developed by Boeing engineers.

“We knew we needed help, and that the Center for Applied Simulation and Analytics had the tools and expertise we needed to do the payload visualization, so we could realize the full benefit,” said Randy Krohn, Boeing Test & Evaluation software engineer.

“By allowing us to see, visually, what’s happening with the animated diagram, we can see exactly where and when something goes awry. It sure beats watching script flying by on a small terminal display. The CASA engineers knew how to help us turn our Visio line drawing into an animated, fully adaptable visualization. If we had tried to do this one on our own, it wouldn’t have been as flexible and replicable for others,” said Krohn.

For CASA, the job was all in a day's work.

“As a contributor to the Information and Analytics initiative, we have built a world-class center providing flexible and affordable environments for modeling, simulation and analytics research,” said Steve Swaine, leader for the Support & Analytics team at Boeing Research & Technology.  “We’re an enabler. We’ve developed a recipe that is scalable and can deliver our customers the right amount of analytics for what they need.”

“It was sort of like walking into the future. That 28-foot (8.5-meter) large wraparound presentation screen reminded me of the bridge of the Starship Enterprise, and allowed immediate access to our interactive data. We also had eight screens  - one for every team, and those views facilitated rapid-fire discussion, allowing us to get double the amount of work done,” said Aubrey Stewart, Space Launch System Exploration Upper Stage chief engineer.

“CASA is a fine example of where we want to go with the Information and Analytics initiative. It is one very important tool in our toolkit that increases our ability to analyze the immense amount of data coming from our customers, markets and products to build the next-generation of products faster and better, and to help our customers understand the value of the data being captured,” said Ted Colbert, Boeing chief information officer and senior vice president of Information & Analytics.