From testing to the first major join, the Michoud Assembly facility in New Orleans, La., home of Space Launch system’s (SLS) core stage, is bustling with activity and milestones. The forward skirt is the first of several parts to complete avionics integration and testing. It houses flight computers, cameras and avionics or part of the “brains” of the rocket. Boeing employees are busy installing propellant feed lines, helium tanks and other components into the engine section. The intertank, another area that houses avionics, is nearing completion. It will be placed horizontally and mated with the liquid oxygen tank and forward skirt. This forward join process will be the first major integration of the core stage.

The core stage is the backbone of the world’s most powerful rocket. The framework is made up of five sections: the engine section, liquid hydrogen tank, intertank, liquid oxygen tank and forward skirt.

NASA's Space Launch System will enable a new era of space exploration. With NASA's Orion spacecraft, SLS will launch astronauts on missions to the Moon, Mars and beyond. 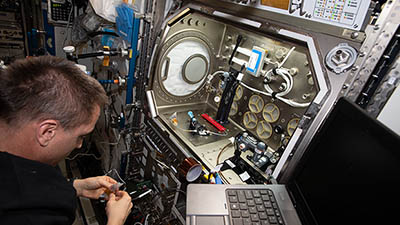