FIRST Robotics is a nonprofit with the goal of getting students excited about science, technology, engineering and math — better known as STEM.

You could say that Spring Beasley got involved with FIRST Robotics by accident.

“My daughter Charlotte wanted to be on the team," said Beasley, who is the director of customer engineering for Boeing Commercial Airplanes. "The first event was pretty far away, so instead of driving back and forth, I decided to just stay and started talking to people. By the time I left, I had volunteered to judge a competition the next weekend, then I became a mentor!”

Each year, FIRST reveals a new game field at a worldwide kickoff event, and students — alongside their adult mentors – must design and build a robot that can perform a series of tasks within the field of play.

Using computer coding, physics and engineering principles, power tools and teamwork, they build the best robot they can in just six weeks.

“At that first event, I saw Charlotte laughing and making friends with other team members. I saw her come out of her shell, and I knew I had to support this program,” Beasley said.

The team — named Reign Robotics — is one of FIRST’s few all-girls teams.

“Many of these girls had never picked up a drill, but there’s a lot of transformations that happen. That’s one of the things that I love about it: Suddenly these kids realize they can do really technical stuff.”

Roughly 500 Boeing employees across the country are mentoring more than 600 FIRST teams this year — the highest number ever — all hoping earn a place at one of two championship competitions taking place at the end of April.

Boeing is the game sponsor for this year’s FIRST Robotics competition called “Destination: Deep Space,” a theme that was chosen to celebrate the 50th anniversary of the Moon landing. The game elements are all space-related and designed with the help of Boeing engineers.

Charlotte graduated high school last year and is now studying computer science in college. The STEM gene runs in the family — Beasley’s youngest daughter, Percy joined Reign Robotics as a freshman this year and is eager to pick up where her big sister left off.

“As a mentor, I want to help them identify roadblocks and solve them. I ask them what the problem is and we work together to find a way to solve it,” she said. “I’ve watched these girls become leaders; they bring the new team members in and help them learn. I’m bursting with pride for these kids.”

Watch the video to see how the Reign Robotics team kicked off the FIRST season.

This story is the first in a series about Boeing’s partnership with FIRST Robotics and Reign Robotics’ journey to championship. 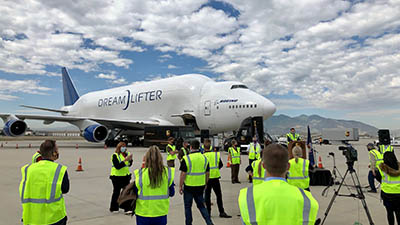