Boeing is wrapping up final join procedures that close out the mate of the engine section to the other four-fifths of the Space Launch System (SLS) core stage. SLS is NASA’s heavy-lift rocket in production at the agency’s Michoud Assembly Facility in New Orleans.

After completing the engine section earlier this month, Boeing executed an innovative maneuver to flip it from vertical to horizontal for the core stage join. The horizontal connection was conceived earlier this year to accelerate production. After Boeing technicians bolted the two sections together, they began integrating systems and preparing the stage to receive the four engines.

Powered by the SLS core stage, four RS-25 engines, and twin five-segment solid rocket boosters, the first SLS rocket will be able to send more than 26 metric tons (57,000 pounds) of payload to orbit the moon on NASA’s Artemis I mission. The core stage will store 730,000 gallons of super-cooled liquid hydrogen and liquid oxygen needed to fuel the RS-25 engines.

SLS will power the Orion crew vehicle out of low Earth orbit, reaching a speed of at least 24,500 mph to travel to the moon. The next planned evolution of the SLS, the Block 1B crew vehicle, will use a new, more powerful Exploration Upper Stage (EUS) to enable more ambitious missions. Boeing is designing the EUS for production at Michoud, using the same core team and tooling.

After the engines are installed, NASA’s Pegasus barge will transport the entire core stage to Stennis Space Center near Bay St. Louis, Mississippi, for Green Run testing. With testing and final adjustments complete, Pegasus will take the core stage to Kennedy Space Center in Florida, where it will be prepared for launch.
SLS is the foundational capability that will enable NASA’s Artemis missions, planned to land the first woman and the next man on the moon by 2024. 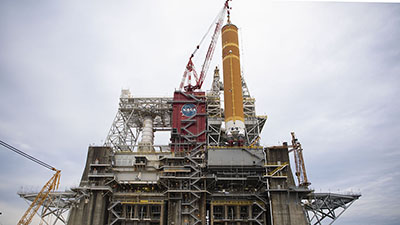