On September 12, one day after the 19th anniversary of the September 11th attacks, a soldier who served in Afghanistan received the keys to his new home in Hillsboro, Missouri, near St. Louis.

The home was specially built for Sgt. Nathan Shumaker and his family by Homes For Our Troops, a nonprofit that builds and donates homes to severely injured veterans. Shumaker, who is a Purple Heart recipient, lost one of his legs during combat in 2010. His new home includes accessible features like hardwood floors, roll-under counter tops, a roll-in shower and pull-down cabinets.

Last year, The Boeing Charitable Trust made a $3 million contribution to Homes For Our Troops to support build projects throughout the country over a three-year investment period. Sgt. Shumaker’s home is the fifth home built as part of Boeing’s partnership with Homes For Our Troops.

“My dad is a proud veteran and, while he wasn’t injured in combat, he suffered a disabling accident that made navigating physical spaces extremely difficult. I watched him reinvent himself time after time and adjust his passions in life to accommodate his new reality. And, I have seen firsthand how an accessible space can be life changing,” said James Dewees, F-15 production operations director. “Thank you for allowing me to represent Boeing and playing a small part in what is such a huge honor. I wish you and your family nothing but the best.”

Veterans receive the keys to their new homes during special key ceremonies that include an honor guard and flag presentation. The ceremony for Sgt. Shumaker’s home on Sept. 12 was a bit different — socially distanced and masks were required. But the new safety requirements in place because of COVID-19 didn’t diminish the celebration.

In 2019, Boeing contributed more than $10 million to military and veteran organizations; more than $900,000 of that was spent in Missouri. These investments are part of Boeing’s overall giving strategy that focuses not only on helping veterans find jobs but also focuses on recovery and rehabilitation programs addressing veteran suicide, traumatic brain injury and post-traumatic stress. Through partnerships like the one with HFOT, Boeing is helping save lives by reaching and healing those with visible and invisible wounds. 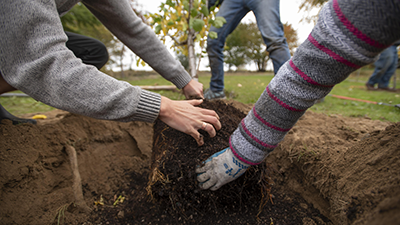