How do piloted and autonomous passenger and cargo air vehicles safely share the airspace of tomorrow? It’s a question that Boeing and our research partners are answering today as part of the Galician SkyWay Project.

The Boeing-led Galician SkyWay Project is a consortium including six Spanish and Galician companies and government entities: the Spanish National Institute of Aerospace Technology, ENAIRE, Gradiant, Televés, Centum and SOTICOL. The program launched in May 2019 to develop flight contingency management solutions to keep people safe in the air and on the ground.

With this consortium, we are developing and testing these innovative solutions at the pioneering Rozas Airport Research Center in Lugo, Spain. Sitting at the edge of a 1,200- by 35-meter runway and equipped with a 40- by 40-meter hangar and a new control tower, the airfield is an ideal location for testing unpiloted aerial vehicles (UAVs), which are currently only permitted to fly in restricted airspace.

Our Galician SkyWay Project is researching and developing several advanced technologies in pursuit of a common goal: to strengthen the safety of UAV operations and pave the way for a future ecosystem where traditional aircraft and UAVs coexist within an airspace.

Airspace is shared by a wide range of aircraft: commercial airplanes, gliders, emergency helicopters, hot air balloons and now UAVs. Aircraft rely on awareness of the surrounding environment to be able to maintain a safe distance, so it is key to provide UAVs with tools and sensors that alert them when another aerial vehicle is getting too close. One way that we are addressing this is by equipping unpiloted aircraft with high-resolution cameras using synthetic vision algorithms based on deep-learning technologies and passive radars. These spatial awareness technologies can identify potential risks in the nearby airspace, issue alerts to piloted and autonomous aircraft and, if needed, trigger avoidance algorithms that compute a safe trajectory for the aircraft to avoid a collision.

When an aircraft loses engine power, it can still rely on its gliding capability to perform an emergency landing. With piloted aircraft, the pilot makes the decision on the appropriate gliding path to follow, where to land and how to land. However, with UAVs, we add algorithms and artificial intelligence to the mix. The Boeing team in Madrid has developed automatic solutions that compute the safest gliding path to the nearest landing site while, at the same time, taking into account the current weather and the performance characteristics of the specific aircraft.

We are combining traditional visual odometry algorithms and a state-of-the-art neural network (trained against a database of thousands of runway images) to make autonomous aircraft operations and contingent event landings even safer. By combining these advanced technologies, an autonomous aircraft can determine its position relative to the runway’s known heading and dimensions to safely conduct an autonomous emergency landing.

Communication between UAVs, piloted aircraft and ground traffic control needs to be reliable and impervious to interference. To protect the aircraft from cyberattacks, the Galician SkyWay Project is building jamming and spoofing detection systems for both radiolink and Global Navigation Satellite System (GNSS) signals. We are developing health monitoring boards and redundant link systems that use the 4G cellphone network.

Similarly, we are researching complementary solutions for backing up satellite navigation services, which may be highly vulnerable in low size, weight and power systems, also known as low SWaP systems. We are harvesting all possible options: 4G cellphone coverage, terrestrial TV antennas, image-based navigation and others. Aircraft may one day use a combination of solutions, including software-defined radio, image registration techniques, downward-looking cameras and aircraft attitude, to navigate without relying on satellite signals.

The behavior of all of these technologies will be supervised by a global contingency manager, which monitors the current state of the aircraft and makes decisions on what to do, taking the role of an overseer with an embedded artificial intelligence. Importantly, the behavioral rule set for this embedded AI is fully understandable by a human and fully coherent and interpretable by a machine, making AI and human intelligence complementary layers of safety.

As a pathfinder for these technologies and the future mobility technologies that we are working on throughout Boeing, the Galician SkyWay Project aims to develop operational and safety solutions posed by the emergence of UAV systems increasingly sharing airspace with traditional aircraft. The technological learning and experimentation will benefit not only those collaborating on the project but also the broader aviation industry.

Through technology development and investments, as well as work with other industry leaders, new and existing partners and regulators, the unified approach of the aviation industry to prioritize the safe development of airspace management technologies and governance — including flight contingency management — will help make the future mobility ecosystem a reality.

About the Galician Civil UAVs Initiative

The Spanish region of Galicia, where Rozas Airport is located, has started the strategic Civil UAVs Initiative, which aims to achieve greater efficiency in a range of public sector services and activities through the use of aircraft and autonomous marine vehicles.

The development of an aeronautical industry in Galicia is a government priority, leveraging research and development to guarantee competitiveness of the local economy in an inclusive and sustainable growth model, enabling Galician society to respond to global economic, social and environmental transformations. As part of that effort, Galicia aims to grow its industrial base in the field of autonomous civil aircraft applications by creating a technological park around Rozas Airport in Lugo.

Rozas Airport Research Center itself is a joint initiative between the Spanish National Institute of Aerospace Technology, the national air traffic manager ENAIRE, the Galicia Regional Government’s Galician Innovation Agency (GAIN) and the Galician Institute for Economic Promotion, as well as the Ministry of Science, Innovation and Universities.

This project is the result of services and work co-financed by GAIN and is part of a cooperative agreement between GAIN, the Ministry of the Economy and Competitiveness and the Agency for Technological Modernization of Galicia. The project also counts on the support of the European Regional Development Fund. 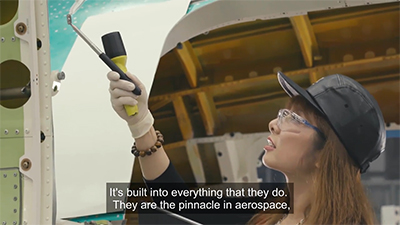 Suppliers are key to Boeing success