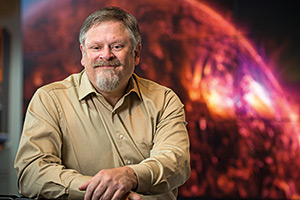 When it comes to outer space, there’s no shortage of dreamers. But with real science, technical rigor and informed imagination, possibilities for humankind can be unlocked.

Q. What is concept development?

A. Concept development is both an art and a science. A basic understanding of how the world works mixed with common sense will go a long way. Add to that innovative thinking, and you have the first vestiges of a good concept. It is a skill that is difficult to learn because it requires more than engineering, more than analysis, and more than management of a project; it requires the ability to develop, refine and communicate a vision.

Q. You recently completed an internal concept study on automated manufacturing on asteroids. What is the opportunity there?

A. Asteroids are unique and accessible. For asteroids less than a kilometer long, gravity is almost nonexistent; navigation in and around them can be easily managed without a lot of energy expenditure.

Small asteroids are like piles of dirt clods clinging to a larger core rock. These may be the very best opportunities for mining we can find. Why? Because it is much easier to mine a pile of dirt than it is a big solid rock. The first step in a mining operation on Earth is to make big rocks into small rocks. This usually involves high energy expenditure (like TNT) and a rock crusher of some sort. If you can mine an undisturbed rock pile instead, then you’ve eliminated a significant step in the process and can focus more on building with less spent on demolition.

Q. Are we talking about mining asteroids for use on Earth?

A. Not necessarily. We should primarily mine the asteroids for use in space. Building infrastructure for more mining or eventually for habitats that could support human operations. Both are options.

That said, there are some things in the asteroids that might make a case for themselves being sent back to Earth, like materials that are still quite rare on Earth. Itokawa, a typical LL Chondrite asteroid, was landed upon by an unmanned Japanese explorer in 2005, and samples it took made it back to Earth in 2010. The materials they found on Itokawa included many precious minerals, some in a surprising abundance. So as a mining operation is developed, there will always be the possibility that there are enough materials discovered to justify the cost of a ride home to Earth.

Q. Many people and companies seem to be focused on Mars. Why?

A. The Red Planet fires the imagination. From the 1877 discoveries of so-called canals on Mars by astronomer Giovanni Schiaparelli, to Edgar Rice Burroughs’ 1911 story of John Carter, Mars has held human fascination. The wholly unexpected success of the Opportunity rover—an unmanned explorer meant to last 90 days, but still alive and exploring after 13 years—gives hope that manned exploration will be equally successful.

To answer in a more technology-focused manner, there are a number of factors from the standpoint of business and simple human-scale perception. Mars is like Earth. It has gravity and atmosphere and sky, and it LOOKS like Earth—at least what Earth might look like without water.

It remains to be seen if Mars is exploitable, though.

Q. What is the benefit of achieving human exploration of Mars or deep space?

A. Deep space holds so many mysteries and so much potential for human advancement, it is impossible to capture. The past has taught us that we are not limited by what we see around us today or even what we imagine for tomorrow. In 1975, the makers of the first CRAY supercomputer could not have imagined that within 40 years, we would carry around a device smaller than a pack of cards with a thousand times more computing power.

People need to think more about the long term… the long, long term. Sometimes there’s no near term return on investment; you just have to continue to play the long game.

Exploration of Mars will actually be the best way to answer this question. Right now, we can only imagine the benefits of exploring Mars. NASA’s role in space exploration will only carry the missions so far.

Q. What has to happen between now and the time we actually get to Mars or to an asteroid?

A. We must first develop the technology that allows us to achieve our goals once there. There is still a lot of value in unmanned systems for exploring space. The use of space manufacturing to build a self-replicating capability is one such idea. That capability at its most fundimental requires significant development in both mechanical systems, as well as software to drive it. Once you have that first self-manufacturing capability, the process becomes evolutionary rather than revolutionary.

It doesn’t take processing capabilities that are too far beyond the capabilities we have in autonomy today. The biggest investment any company can make towards the goal of autonomous deep space systems is in the people who understand and do autonomy.

More difficult are the manufacturing challenges that are not part of our history. Such as making raw materials in the form of rock and dust into useable materials for producing objects. Making the basic issues even more difficult is the absence of gravity and atmosphere. Most of our processes for refining materials currently require gravity, and almost all require products drawn from the atmosphere, like oxygen for heat for energy production.

Perhaps most difficult will be automation. While telepresence has come a long way and will continue to develop, it cannot overcome light-speed limits and distances that will induce minutes of latency. Therefore, independent command-and-control at the site will be required. To address this, likely the best approach is to develop piecemeal technology that contributes to this operation as a long-term goal while also solving near-term needs.

Q. What is the serious likelihood of all this, and how far in the future are we talking about?

A. All of this can indeed be done. It is not impossible that this exploration could incite another gold rush.

The key term is “possible.” Let’s face it, the landing of a probe on asteroids is not a simple task. If a gold rush does result, and a self-replicating system has been in place for some time, whomever has put that system in place, whomever had that vision, will certainly have the upper hand on claiming a large part of the available resource.

With the right investment, a self-replicating capability could be seen in a couple decades with profitability in another decade. But that will require a significant commitment to see it through.