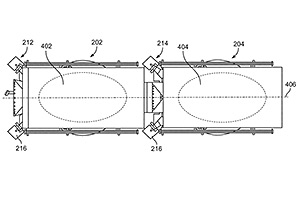 Some existing satellites use chemical propellants that are costly, highly reactive, weighty and burdensome. Use of electric propulsion systems is not hazardous, does not require onerous handling tools or equipment at the launch site, and are extremely safe to manufacture and operate.

Radiation in outer space typically consists of high energy, charged particles like gamma rays, protons and neutrons. This type of radiation damages human tissues and cells, as well as instrument and communication systems on board space vehicles and stations. The sun occasionally releases significant amounts of ionizing radiation known as coronal mass ejectas (CMEs). Even though CMEs are relatively uncommon, the radiation they potentially inflict upon a crew and equipment of a spacecraft requires shielding.

A need exists for radiation shielding that deflects ion particles in all directions, protects all areas of an internal chamber, is effective over long periods of time, and protects against long term exposure to magnetic fields. Active shielding, like the Earth’s magnetosphere, can deflect radiation particles by creating enough flux density to change the trajectory of radiation particles, thereby diverting the radiation away from the Earth.

There are unique features of a terrestrial network management system (NMS) that limit the usefulness of the terrestrial NMS to a system in space. Specifically, a space-based NMS, being isolated, must maintain a high level of reliability and availability, notwithstanding the increased environmental impacts encountered in space. In addition, the space-based NMS must recover quickly and autonomously.

Modern aircraft cockpits are becoming increasingly advanced with respect avionics displays. Customizable touchscreen displays provide pilots with extensive flexibility to process vast quantities of information. However, touchscreens may require increased pilot visual attention as compared to the manipulation of conventional cockpit controls such as buttons, switches or knobs, which provide pilot and crew with tactile reference points for utilizing with less visual attention.

This patent granted to Boeing provides more efficient thrust reversal. An air extractor extracts at least of a portion of air from a volume adjacent the diverter fairing to increase the effectiveness of the cascade vanes, thereby enabling a reduction in the length of the cascade and, thus, a reduction in the weight of the engine. Example thrust reversers disclosed in the patent increase the performance of a multi-door type thrust reverser. As a result, the diverter door may be made smaller without sacrificing performance.

Traditional and advanced means of providing power for uAV/nAV applications include turboprops and flapping wings.  Such systems can be mechanically complex and require power transformation using several stages. Plasma propulsion systems consisting of a single dielectric-barrier discharge unit have been employed, but have resulted in poor efficiency and insufficient power.

This patent specifies a plasma discharge device for accelerating air flow to propel a vehicle that incorporates a nozzle having upstream and downstream ends and a plurality of substantially cylindrical electrodes separated by dielectric spacers.

In a vehicle with this plasma propulsion nozzle, air is introduced through the nozzle inlet. A periodic voltage signal is applied, creating and expelling plasma clusters, introducing momentum change into the air along the interior chamber for exit through the nozzle outlet and producing thrust. Thrust is controlled by varying the frequency, wave shape, and amplitude of the periodic voltage signal.