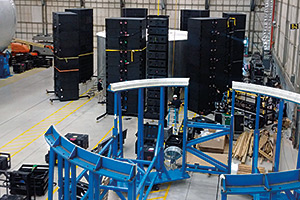 These go to eleven
Engineers arranged an array of amplifiers and subwoofers to simulate the acoustic power of a rocket at liftoff.
Boeing

Boeing test engineers recently made a lot of noise and shook the rafters at NASA’s Michoud Assembly Facility in New Orleans. During a development test simulating the effect of the external acoustic environment generated during a Space Launch System liftoff, it was loud.

One hundred and forty-two decibels.

That is like being within 45 meters of a jet aircraft, and is above the threshold of pain for humans.

The exploration upper stage (EUS) to be used on the second configuration of the SLS will be exposed to an intense acoustic environment during launch that will generate vibrations that could potentially damage the launch vehicle structure.

One potential means to mitigate the impact is to install acoustic blankets inside the launch vehicle to absorb the acoustic energy. But, the application of acoustic blankets is a weight penalty to the EUS. It diminishes payload, which means accurate mathematical modeling validated by test data is essential.

To simulate the acoustic environment generated at liftoff by four main engines and the two solid rocket boosters producing a net 39 million newtons of thrust, test engineers brought in Maryland Sound International—known for its rock concert sound systems—to set up 14 speaker stands with 140 subwoofers and 168 amplifiers. Standing at 6 meters tall, the speakers were placed around a simulated EUS barrel section.

The development test collected data with and without acoustic blankets deployed on the inner surface of the interstage simulator to determine the achievable reduction in the internal acoustic environment. The type of testing is called a direct field acoustic test (DFAT), a method that minimizes cost and schedule because the test could be conducted in situ.

The speaker array produced an overall sound pressure level (OASPL) of 142 dB. The actual flight environment for the exploration upper stage has an OASPL of approximately 155 dB, but the direct field acoustic test level of 142 dB was adequate to fully exercise the mathematical modeling. This test was the first DFAT performed by Boeing for a NASA program and was the largest diameter DFAT ever executed.

The greatest challenge to the DFAT was dealing with the logistical issues associated with executing the test inside the Michoud Assembly Facility at the same time manufacturing was proceeding for the Core Stage of the first launch vehicle. The test required 2,000 square feet of space near an external wall of the building, so the power lines could be brought in from the diesel generator parked just outside the building. The power required to run the sound system at max levels was 300-400 kVA.

Michoud personnel had to cut a hole in the wall next to the test setup to allow the power lines to be brought in from the generator. (The hole was patched after the test completed.)

The DFAT was executed over a weekend to minimize the number of people in the building. During test execution, the entire building near the test shook, and the vibrations could be felt through the floor and the walls. The DFAT has been a significant success and generated the required data to meet test objectives and will provide improved performance and efficiency for all SLS systems over the life of the program.