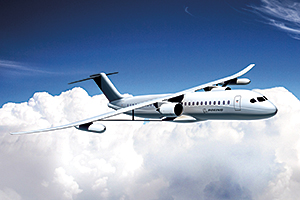 BOEING SUGAR VOLT
The SUGAR Volt, which would use a hybrid-electric propulsion system, is one of several notional concepts for the 2030-2050 time frame that a Boeing-led team studied for NASA as part of the Subsonic Ultra-Green Aircraft Research (SUGAR) project.
Illustration: Boeing

Boeing needs batteries today for energy storage in nearly all of its platforms, including airplanes, helicopters and satellites. But to prepare for a future of more aircraft electrification, we must determine a better battery chemistry for the aerospace industry that provides a combination of superior technical performance and minimal environmental impact, ensuring a sustainable and responsible use of energy and its storage.

A commonly used process for evaluating environmental impact is Life Cycle Assessment (LCA) as described in the International Organization for Standardization (ISO) 14040. The LCA method is used to quantify material and energy flows of a product system, and the subsequent waste and emissions generated throughout the product's lifecycle. Using data provided by the Greenhouse Gases, Regulated Emissions, and Energy use in Transportation model (GREET) database, four key life cycle phases and five impact categories were explored across each battery chemistry:

Impacts to the environment from wastes and emissions are used to characterize the “footprint” of a product's lifecycle.

This summary represents a literature review and analysis of the battery technologies of both conventional and advanced cell chemistries, the methodology of the LCA approach, the LCA results, and a comparison of each LCA metric to determine the optimal aerospace battery.

The conventional battery chemistries included Lead Acid (Pb-acid), Nickel Cadmium (NiCd), and Nickel Metal Hydride (NiMH). These batteries are used throughout the aerospace industry and are well established in other industries. Literature and data regarding the conventional battery chemistries and their respective lifecycles is abundant, and provided the framework for the other batteries considered.

Advanced batteries included Lithium ion (Li-ion), Lithium Sulfur (Li-S), Lithium Air (Li-air), and Zinc Air (Zn-air). These batteries are relatively newer in comparison to the conventional technologies and have promising improved performance. These batteries exist at a range of technology readiness levels. Li-ion batteries are already being used in aerospace applications, Li-S is under active research, and secondary Zn-air or Li-air batteries are at low technology readiness levels. In fact, use of metal-air batteries in the aerospace industry could be considered only speculative. Information regarding these newer chemistries was limited, and theoretical data was used and assumptions were made to complete the evaluation.

A literature survey was conducted to capture relevant inputs to the LCA study. In all cases, information regarding the system level battery were used over information for individual battery cells. The 787-8 Li-ion battery was used as a baseline with other chemistries scaled to its performance requirements. Key properties of each chemistry included the materials and relative compositions of each chemistry, the manufacturing process, end of life scenarios, and lastly performance attributes such as specific energy (Wh/kg), discharge cycles, depth of discharge, and charge efficiency.

Differences in battery weight within the use phase are also a critical consideration for aircraft performance. Increased weight results in greater fuel burn, resulting in emissions and upstream fuel production impacts. For this, information regarding the impacts of a 787-8 was taken from quickLCA, a software tool developed by Boeing to conduct aircraft level LCAs. Changes in fuel efficiency driven by an aircraft’s operating empty weight were also considered, but were found to be negligible given the range of weights used in this study.

Results for CO2 emissions generated and water consumed by each battery, follow similar trends in terms of relative performance to other batteries. When excluding impacts to aircraft performance, each of these EPMs are driven by total battery weight. Li-S and Li-ion consistently outperform other chemistries, while Li-air and Zn-air perform significantly worse than the other batteries.

Figure 3.4 shows the total lifecycle solid waste-to-landfill of each battery for similar lifecycle phases represented in the previous figures. These results are significantly different from the other environmental performance measures. Here, resource extraction dominates over the other lifecycles. Li-S and Li-ion perform the best while Li-air and Zn-air perform orders of magnitude worse.

Figure 3.5 shows the lifecycle total energy consumption of each battery chemistry with the same lifecycle phases represented as Figures 3.1, 3.3 and 3.4, with the exception of the use phase. The use phase is divided into the energy actually used for the aircraft mission and the energy lost to charge inefficiencies. Results of Figure 3.5 demonstrate the dependence on total battery weight similar to the results of Figures 3.1 and 3.3.

Li-S is the best performing battery by this metric. However, Pb-Acid and Li-ion are both near the 50 percent target. Given the assumptions made and fidelity of the data, they could also be considered high performing. Alternatively, the metal air batteries show very poor performance.

When taking into account aircraft performance, the results show the energy intensity of materials and manufacturing processes are less significant than the overall technical performance of the battery. This is true for each measure except solid waste-to-landfill. The high volumes of waste generated by the metal-air batteries are driven by the limited number of discharge cycles, requiring the batteries to be replaced more often.

Recycling measures are a classic method to reduce impacts to resource extraction. However, it is evident that recycling measures could greatly reduce the amount of solid waste-to-landfill for every battery chemistry.

In every metric of this study, Li-S batteries outperformed the other chemistries. Li-S low weight overcame perceived shortcomings such as low charge efficiency, poor recyclability and energy intensive manufacturing processes.

Not only do Li-S batteries have the lowest environmental impact potential for aerospace, it also promises significant advantages in technical performance. However, the technical maturity of this technology will need to improve further to realize some of the life cycle benefits outlined in this study.

The Pb-acid battery chemistry is an established technology that was invented in 1859 making it the oldest rechargeable battery. The Pb-acid battery can be found in various aerospace applications. The components of the Pb-acid battery cell include a cathode comprised of lead peroxide, an anode made of sponge lead, electrolyte of sulfuric acid, and a fiberglass separator.

The advantages of the Pb-acid battery are its manufacturing simplicity, mature technology, dependable service, low maintenance requirements, and low cost. Additionally, processes have been established to make the Pb-acid battery highly recyclable. It is estimated that 95 percent of all Pb-acid batteries produced are recycled, and new Pb-acid battery materials range from 60 to 80 percent recycled content.

Although the basic chemistry for NiCd batteries has been used for some time, there has been continuous development on the electrode, electrolyte and packaging technologies to enable a wide range of applications. The components of the NiCd battery cell include a cathode composed of nickel hydroxyl oxide, an anode made of metallic cadmium, and an electrolyte of potassium hydroxide.

NiCd cells come in all forms for many applications such as small cylindrical cells for lower power, pocket-plate for high mechanical and electrical abuse, and sintered plate for higher-rate discharge. The flexibility of NiCd batteries is why it is used on many Boeing defense and commercial products with specific power requirements. Besides the wide range of applications that NiCd batteries have, other advantages include reliability, long battery cell life, low maintenance, long storage life, and a wide range of operating temperatures.

NiMH batteries are commercially available batteries that are widely used in hybrid vehicles and portable electronics. The NiMH battery originated as the successor to the NiCd battery, and exhibits a higher energy density and specific energy when compared to Pb-acid and NiCd. The components of the NiMH battery cell include a cathode composed of nickel hydroxyl oxide, an anode of mischmetal (Me) hydrides, electrolyte of potassium hydroxide, and a separator of a porous polypropylene membrane.

Recyclable materials are used in the construction, and the battery does not contain hazardous materials such as cadmium, mercury or lead. The batteries are also maintenance free, and are safe during charging and discharging.

NiMH batteries are not historically used as a primary source of power in aircraft applications, although the NiMH cells are used within other aircraft equipment or systems, such as the emergency door and floor escape path lighting, as well as portable entertainment devices and electronic flight bags.

Li-ion batteries provide energy on a vast array of programs across Boeing. The designs for each of these platforms include either small- or large-cell formats making up the battery pack. Small cell batteries offer many advantages over large cells, including high reliability, high-volume manufacturing, high-volumetric efficiency, and reduced likelihood of cell-to-cell thermal runaway propagation.

Environmental impacts are minimal in the production of lithium and extraction processes are not energy-intensive. However, recycling standardization is challenging due to the variation in materials within the cathode, anode and electrolyte used to construct Li-ion batteries, as well as diversity in shapes and sizes.

The Li-S battery is capable of revolutionizing the battery industry. With a theoretical energy capacity of 2600 Wh/kg, it has an energy capacity five times higher than Li-ion batteries. The battery is lightweight, inherently safe (doesn’t make use of flammable solvents), durable and maintenance-free. The battery has a low cost in comparison to anode- and cathode-based materials such as graphite and LiCoO2, respectively. For comparison, the cost per capacity ($/kAh) is 110 (LiCoO2) vs. 1.9 (graphite) vs. 1x10-3 (Sulfur).

As with all lithium battery chemistries, there is a risk of combustion if lithium is exposed to the air. The primary weaknesses of the cell chemistry is the formation of lithium dendrites and dissolution of sulfur active materials from the polysulfide shuttle effect, ultimately limiting the charge-discharge cycle life.

Advancement in this technology is showing the likelihood of the Li-S battery becoming the battery of the future. The current industry leader in Li-S technology is Oxis Energy, which currently produces the rechargeable Li-S Rack Mounted Battery for European consumers.

Li-air, also called a Li-oxygen battery, is typically designed using a lithium metal anode, a porous carbon cathode and an electrolyte (typically lithium salt). Metal-air batteries have the highest energy density because the cathode active material (oxygen) is not stored in the battery, but can be accessed from the environment. Currently lithium batteries are the subject of ARPA-E efforts, but are not mass produced commercially. The theoretical capacity of Li-air batteries makes them very attractive for aerospace and automotive applications, however several technical challenges need to be overcome.

One of the major drawbacks of this technology is current Li-air batteries lose 25 percent of their original capacity after only 50 discharge cycles. Charge efficiency with a carbon cathode is only 57 percent, which falls well short of the typical aerospace efficiency of >90 percent. Use of platinum or gold catalysts can improve this to 73 percent, however, this is not likely to be a commercial solution due to the cost of platinum and gold.

As mentioned earlier, the greatest benefit provided by metal-air batteries is their high energy density, as compared to other battery chemistries. The Zn-air configuration represents a safe, environmentally responsible and potentially inexpensive option for the storage of electrical power. Because of this fact, a recent surge in research efforts has developed in Zn-air battery chemistries for potential usage in both portable (cell phones, laptops) and stationary devices (power grid), as well as electric vehicles.

Zn-air batteries are composed of three main components: a zinc anode, an alkaline electrolyte (potassium hydroxide), and an air cathode, usually made of a porous and carbonaceous material.

When comparing Zn-air batteries to other metal-air chemistries, there are several potential advantages that can be exploited in the battery manufacturing process. One example is the abundance of zinc metal as a raw material. This key benefit potentially provides an advantage in the hypothetical expense of the mass production of zinc-air batteries. With respect to the environment, zinc, as a raw metal, is a safer material than lithium and can be fully recycled.