The new look of innovation 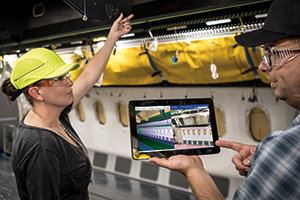 Photographers and computer engineers come together from different parts of the company to invent a more efficient design process.

When you think “aerospace innovation,” images probably come to mind of satellites and space planes, sleek airliners and autonomous aircraft.

But the realm of invention isn’t ruled solely by rocket scientists and advanced research and development.

Truth is that innovation in a company as vast as Boeing can come from anywhere—even from a photographer like me.

A couple years ago, Boeing’s Everett Modification Center asked my group, Scientific Imaging, to fully document the flight test configuration of one of the early 787 flight test airplanes. Their request was to photograph both the main and cargo decks of the aircraft, as well as all of the exterior areas, providing a complete visual record of the current condition of the aircraft.

The photographs would be used to reference the current condition of the aircraft and compare it to the design configuration. This process would support building an estimate of the work necessary to reconfigure the aircraft to be sold as a Boeing Business Jet.

In order to streamline this process, I recommended using Virtual Tour technology, a photographic, interactive computer walk-through of an airplane’s exterior and interior, similar to a real estate tour of a house. This “as-built” interactive record has a myriad of uses both inside and outside the company.

In order to determine the required configuration, the 787 Program used Boeing’s own patented Integrated Visualization Technology (IVT) that provides a 3D rendering of all (available modeled) systems and parts installed on every commercial airplane. The user can pan and zoom through layers of modeled data, and click to view part information.

And so it struck me: What if we tied the IVT and Virtual Tour technologies together? Networking these technologies could streamline Boeing’s current process, allowing modification engineers to quickly compare the “as-designed” models to the “as-built” configurations. Could the solution really be that simple?

With the help of IVT experts, Associate Technical Fellow Jim Troy for IVT, and industrial engineer Katherine Meza from Boeing’s Visualization Center of Excellence, we joined these two systems in order to support Boeing’s needs. We built the: “Synchronized Side-by-Side Display of Live Video and Corresponding Virtual Environment Images.”

The process allows users to display a panoramic image captured for a current environment, and then display a visualization of the corresponding 3D model at the same viewpoint. Communication between the computer applications—a panoramic image viewer application and a 3D model visualization application—provides the ability to synchronize viewpoints, and information relative to engineering and the real world environments.

Program managers estimated the new technology saved thousands of labor hours in only its first year of use. Since its initial deployment on 787 in 2016, the technology has been used for the 737, 747, 767, and 777, and is driving additional applications and replication across Boeing’s defense programs.

Turns out, even the simplest solutions can become valuable innovation. The U.S. Patent Office granted the patent for this new invention in February 2018.