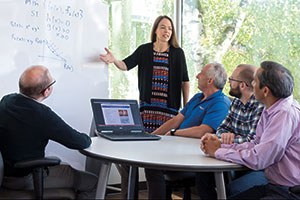 FIGURING IT ALL OUT
Technical Fellow Sharon Arroyo discusses potential solutions with colleagues from the Boeing Math Group.

Q: What technologies of the future will be dependent on skilled and creative mathematics?

A: In the future, automation, autonomy and data driven systems will be even more ubiquitous than they are now. Transportation will rely increasingly on mathematical modeling and optimization of large scale networks. Artificial intelligence will play a much larger role than it currently does. Machine learning will enable discovery of trends in data and behavior that current technologies don’t see. All these technologies rely extensively on mathematics, and none will be realized without skilled and creative mathematicians developing and implementing the core algorithms.

Q: Why is mathematics important to Boeing’s skill portfolio? Why do we need great mathematicians in addition to engineers who are just good at math?

A: The vast size and advanced nature of the engineering work that we do means that very hard mathematics problems naturally arise.  It is to our advantage to maintain a staff of expert mathematicians who can roll up their sleeves to contribute specialized expertise in those situations.

Here’s an example of practical, yet difficult problem:  Say we need to assign mechanics, tools and zones to different tasks to assemble a portion of an airplane.  Mechanics might be qualified to perform only certain tasks, which might require more than one mechanic. Some tasks might need to be performed at the same time, while some tasks might need to be performed before others.  Limited tools might need to be shared across tasks.  And certain zones within the factory might allow for just one mechanic at a time.  How do you schedule the mechanics and resources to assemble the airplane in the least amount of time?

Knowing how to extract a solution to the stated problem given the mathematical model can be difficult. Because Boeing maintains expertise in mathematics, we can tackle problems like this in stride.

Q: What makes applied mathematics an interesting field to work in?

A: Mathematics is inherently multidisciplinary, and it forms the technical basis for a huge portion of what we do.

For example, we have been working with colleagues on supply chain algorithms and tools to determine the best raw material contracts with mills. We leveraged the same technology with little adaptation to improve some of our fastener contracts. We have also been fortunate to work with our commercial marketing team, where we developed solutions to efficiently assign airplane types to airline schedules.

One of the truly great things about being a mathematician at Boeing is having a front row seat to a huge number of the many exciting problems we work on at any given time.

A: I’ve always really loved math. But I knew I wanted to focus on math as a career the day I learned about vector spaces in a linear algebra class in college.

I can still remember visualizing three vectors that could be used to represent every point in three dimensional space. I thought vector spaces were so cool! Up until that day, the professor had been teaching us more standard math topics like adding and multiplying matrices of numbers. That was fine, but the creativity inherent in vector spaces had me looking forward to new math theories and opening and reading new math books.

Q: How can someone be creative with mathematics?

A: Mathematicians need to be creative in every aspect of their job. We have to design, develop and deliver mathematical tools at the right level of generality to support the largest number of applications.

When we start a new project, we need to work closely with the customer to understand the problem that needs to be solved. We figure out questions to ask to determine which details need to be included in the mathematical approach. We then write a mathematical problem formulation to make sure all the customer requirements are represented.

When developing a mathematical formulation, we visualize the problem in such a way that will lead to a good algorithm approach. For example, to determine how best to assign aircraft types to flight legs to optimize efficiency, we visualized the airports as nodes in a network and the aircraft flying along arcs between nodes.  Developing a computer implementation of the algorithm also requires a lot of creativity, especially in constructing an architecture that might be used for other applications.

Even after all the hard work is done, mathematical expertise is still required to interpret the results. Richard Hamming, former president of the Association for Computing Machinery, said, “The purpose of computing is insight, not numbers.” I love working with colleagues around Boeing to gain new insight from solving math problems.

Q: Why is mathematics, in a variety of forms and disciplines, important to the technologies that Boeing is envisioning for the future?

A: I view the third industrial revolution, or the Digital Revolution, as the brain child of the brilliant mathematician Alan Turing. He introduced the methodology for massive computations to be performed in fractions of a second by machine. A natural evolution of this breakthrough is for these systems to perform computations even faster, learn to work together and start to approach cognitive tasks.

The more solutions that are linked together, the more capable the systems. For example, with prognostics, future problems can be fixed before they happen. Mathematics is a key component of prognostics because developing statistical models is a key step to identifying and predicting these potential future problems.  Also, optimization is needed to determine the best approach to addressing the future problems.

Mathematics as a discipline is a common thread tying together this evolution. And it continues to evolve to address emerging technologies, as well as technologies we haven’t even thought of yet.