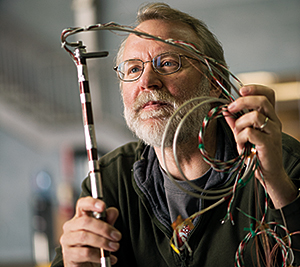 It might be odd to think that metals that change shape can be useful in aerospace, where large vehicles fly at high speed. But that’s the promise of a metals technology called shape memory alloys, which could meet the growing need for lightweight, reliable and innovative actuators.

Shape memory alloys are metals that change shape or move when exposed to a particular temperature stimulus. Although originally developed in the 1960s, the promise of this technology has recently sparked new advancements across a breadth of industries—automotive, robotics, building and infrastructure, telecommunications, orthopedic surgery, dentistry, and even optometry.

Because of their high-energy density and large strain capabilities, these alloys are particularly attractive to the aerospace industry for use in positioning flaps or other aerodynamic surfaces, morphing structural shapes, or replacing conventional hydraulic or electric motor actuators. That’s especially true in instances where size and weight are critical or in environments where conventional actuators cannot survive. In fact, morphing aerospace structures represents a potentially revolutionary use of such actuators.

Boeing is currently the world leader in shape memory alloy technology and system demonstrations. Boeing is also in the position to transition this technology from the lab and flight test demonstration to production-ready designs and FAA-approved applications.

Currently, Boeing does not have any in-production products using this technology. However, the most promising application of these alloys is compact actuators for aircraft models used in wind tunnels.

Every time personnel enter the tunnel to manually reconfigure flaps, ailerons, or other model surfaces, the tunnel has to be shut down and then restarted, costing time and money.

Our design tools and control methods have improved dramatically since we started, and we are close to fully capitalizing on this technology and applying it to future technology development and sensitive wind tunnel test programs.

Another application that is showing both technical and economic promise is what we are calling the “Smart Vortex Generator.” Aero devices such as vortex generators, strakes and chines are often installed to benefit one phase of an aircraft’s flight segment, such as takeoff and approach. During other portions of the flight such as cruise, they may increase drag.

A smart vortex generator using shape memory alloy will react to the colder temperatures at cruise altitudes and autonomously adjust to a low drag shape. A recent study showed that for one particular vortex generator application on a commercial transport, replacing the current static devices with adaptive devices would measurably reduce cruise drag. The gains documented in this study might have been incremental. However, over the aircraft’s lifetime, those gains would add to a significant amount.

Today we are collaborating with NASA’s Glenn Research Center in Cleveland to develop alloys with the right thermal properties to meet the smart vortex generator requirements. Several alloys under development are showing promise both from a technical perspective, as well as a manufacturability perspective.

We have been working with researchers at NASA Glenn since about 2008 on shape memory alloy materials and processing. That work eventually led to the Spanwise Adaptive Wing program. This two-year program demonstrated shape memory alloy-actuated wing fold on an unmanned aerial vehicle and improve manufacturing of a new a high temperature shape memory alloy (NiTiHf) for high torque actuators. The new alloy was used successfully in a recent Spanwise Adaptive Wing UAV flight test at NASA’s Armstrong Flight Research Center in Edwards, California, as well as an F/A-18 wing fold demonstration at NASA Glenn. It is also being considered for other applications.

As we push the boundaries of existing technology, Boeing will need to make new breakthroughs in order to maintain a competitive advantage. Shape memory alloys may not address every actuator problem. But as we face stiffer competition, we need to explore every feasible technology that can realistically give us an advantage.