The humanity in math 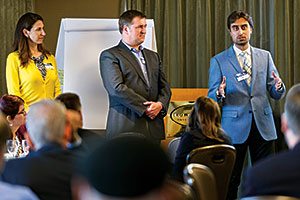 This engineer applies multidimensional thinking to Boeing’s enterprise technology strategy with mathematics at his core.

By Will Wilson, Boeing Writer | Photography by Paul Pinner

Since he was a kid, math has been another language for Jamal Madni.

In addition to speaking Urdu, Hindi and English at home, his parents immersed their son in Kumon, a Japanese approach to math that emphasizes speed and accuracy in solving equations.

“Kumon gave me the confidence and the familiarity,” Madni explained. “Anything that was math-related I could do, and I was excited to do.”

That excitement still animates Madni. As he sees it, facility with mathematics becomes more crucial as autonomy and additive manufacturing, data analytics, artificial intelligence and machine learning and other complex technologies become increasingly eminent in aerospace.

At Boeing, Madni works with technologists and business leaders across the company to align an integrated research investment plan encompassing the current priorities and future possibilities of aerospace. His work as a strategic integrator includes plans for commercial airplanes, defense, space and services—not to mention the emergent on-demand air mobility ecosystem that will reshape and even disrupt those traditional areas of the business.

“Our job is to make sure that Boeing leaders make the right decisions and research investments to achieve our goals—and to do it all at a fast pace so we can meet the marketplace,” said Naveed Hussein, who leads Boeing’s enterprise technology strategy organization, and who has long been a mentor to Madni.

For that, Hussein said, his team needs thinkers like Madni who consider a multitude of angles and perspectives, know how to find patterns and look for gaps, which could be both opportunities and pitfalls.

Technology is one part of it. But figuring out how to deliver technologies and create an ecosystem that satisfies people’s preferences —“where is the human in the loop?” as Madni put it—is crucial to the endeavor. Strategy needs to focus on people, he emphasizes, or “eventually technology for technology’s sake will overpower everything else and you’ll be left with the breadcrumbs of failed ventures.”

The challenges of innovating aren’t solely technical ones. Regulatory and governance matters--everything from air traffic management to the noisiness of flying air taxis and cargo air vehicles might create—have to be solved to move forward with a system that human beings will trust and use.

Math is Madni’s common thread through all of this. He explained that whether it’s finding patterns in sensor information, identifying efficiencies by seeing patterns in human behavioral data, or admiring the symbolism in Francis Ford Coppola movies, one of the key elements of all of that is being able to tell stories through data.

After earning his undergraduate degrees in computer science and mathematics, Jamal Madni focused his graduate studies at UCLA on the ties between math and basketball. He applied his biomedical engineering research to examine stress in players.

“Not everyone on the court can handle winning,” he explained. “And that shows up when you measure it.”

His research was part of a broader interest in wireless health approaches, ways that non-invasive body sensors could communicate information to doctors and to users. For example, could a smart cane provide feedback to help people improve their gait in order to prevent falls?

“Falls are the number one cause of death among people over 65,” Madni said. “I was centered on approaches that combined medical imaging, informatics and Bayesian belief networks.”

What he really wanted to know was: how can we help people who are afraid to go to the doctor.

“Regardless of politics, nationality, race or income, many people are afraid to go to the doctor—even if access isn’t a challenge.” Elevated stress levels during physician exams can also lead to misdiagnoses, he explained.

For Madni, the same root cause analysis and corrective action—all based in math and the scientific method—apply as much to space vehicle anomalies as to human wellness.

For others, his enthusiasm for technology and people, seeming selflessness and broad, intuitive thinking might arouse suspicion. Is anyone that good?

It took Boeing engineering manager Jen Jacobson time to get over her initial “no one does that much and succeeds” impression of Madni.

“I didn’t want to hire him!” she recently kidded with Madni outside the Boeing El Segundo, California, satellites facility. They worked together there for nearly five years. She says today that Madni is uniquely suited to help shape the company’s technology strategy and the future of aerospace.

Hussein has experienced the same, describing Madni as a humanities aficionado who does engineering and science. “He brings this philosophical, human element to everything he says. He can articulate what the future will look like and is able to tie in so many pieces of world culture.”

Madni’s innovation philosophy is all about connections – whether the nodes are mechanical, electronic or human. And he credits his father for the “Renaissance thinking” that blends the arts and sciences, the mathematical with the human.

Asad Madni developed stability control technologies that were applied to the Hubble Space Telescope, as well as in passenger cars, providing lifesaving rollover protection that is nearly ubiquitous on the road today.

But the elder Madni is an artist at heart, according to Jamal. Born in Bombay in the year of India’s independence, Asad won national watercolor painting competitions early in his life and always instilled in his son an appreciation of art, as well as science.

In addition to his technical work, Madni would regularly come into Jacobsen’s office with proposals to engage teammates in development and team-building efforts. Not happy hours or softball games, but fully baked plans for what would become the “Rosen Games” (a satellite innovation competition), the Da Vinci Summit (an award-winning employee dialogue series), a STEM engagement program with local schools, and several other efforts to inspire others as thinkers and doers.

“Seeing patterns is one of my fundamental axioms of creativity. There is a real art to finding patterns. Knowing what to look for, having an intuition for the patterns, that is where the humanities comes in,” Madni said.