No drag on this 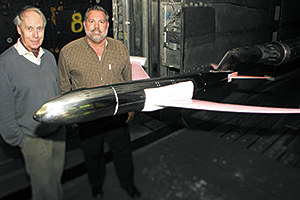 A MODEL FOR COMMON RESEARCH
This view of the Common Research Model with pressure-sensitive paint on it, was installed in the National Transonic Facility at NASA Langley.

This engineer designed a benchmark model for worldwide aerodynamic research

For years at aerospace conventions, John Vassberg found himself in the middle of the same conversation: Why doesn’t the industry have a standard way to measure drag?

By 2000, he and his peers began organizing workshops to address this subject. Eventually, they agreed to work more closely together to explore ways to deal drag. To support this collaborative effort, Vassberg offered his expertise in computational fluid dynamics, where a computer initially analyzed designs and made adjustments to geometric calculations.

“Drag was the piece that was the Holy Grail that we hadn’t been able to secure,” Vassberg said.

First used in 2010, the Common Research Model is a physical model—a metallic 2.7 percent scale model of an airplane shape that falls between a 777 and a 787. At 22 feet long, NASA can disassemble the model, transport it around the world and test it in different wind tunnels.

“It has taken off in directions I never imagined,” Vassberg said. “I knew it would get tested. It’s good to see that a seed I planted out there is proliferating like crazy. There was a need for it.”

Common Research Model results were public domain because drag was considered an industry-relevant issue. Engineers discovered how much variation in test data existed from using different wind tunnels as well as in the interpretation of computer results.

“We needed maximum sharing to see what everyone else was doing that was good,” Vassberg said. “People could adopt practices. People could see what they were doing wrong.”

Drag is difficult to measure because flying objects come in different shapes and move through the air in different ways, plus air molecules can stick to a surface and change object shapes.

The Common Research Model collaboration sparked so much interest that dozens of similar models have been constructed by aerospace organizations or universities globally for further study. To fit into their respective wind tunnels, ONERA, the French aeronautics, space and defense research lab, built a bigger model than NASA’s. JAXA, the Japan Aerospace Exploration Agency, designed a smaller one.

In honor of his work on the Common Research Model, Vassberg was part of a three-person team that received an International Cooperation Award in 2017 from the American Institute of Aeronautics and Astronautics.

“He has a feel for everything aerodynamics and can explain it well to people. I’ve seen him explain it to students, other experts and people around the world. He can use the tools,” Wahls added.

The various aerospace groups protect their experimental work involving drag as proprietary, but they welcome any Common Research Model inroads that provide a baseline and will lead to another 1 or 2 percent in fuel consumption savings. They’re now discussing lift. They could use the Common Research Model for this project, too. Vassberg remains deeply involved.

“This is a very unique opportunity,” said Joe Morrison, NASA’s associate project manager for transformational tools and technology. “We were able to combine the efforts of John and Boeing and do the design. John has been a critical element in what we’ve been trying to accomplish.”