A Unique Research Environment in Brazil 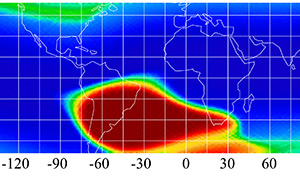 Boeing Research & Technology–Brazil, the company’s R&D facility in this South American nation, studied radiation induced ionospheric disturbances and anomalies in that nation—shown in red in this map. Forthcoming improvements to aircraft navigation systems will correct for these anomalies.

The Boeing reseach facility in this South American nation is driving exploration into the key R&D areas of flight sciences, airspace operation efficiencies, metals and biofuels.

Two projects led by and conducted at Boeing’s research center are representative of the unique research and technology development opportunities in Brazil:

This work comprises the study of interactions of the ionosphere with satellite-based aeronautical navigation systems. The ionosphere is a layer of the atmosphere from 50 km to about 1000 km above the Earth’s surface that contains high density electronic plasma due to solar radiation. Brazil is located under the geomagnetic equator (a low latitude region where the plasma is often least dense), which means that it is subject to radiation induced ionospheric disturbances and anomalies more frequently. One consequence, is the occurrence of disruptions to Global Positioning System (GPS) signals.

These anomalies prevent satellite-based aeronautical navigation systems, such as Ground Based Augmentation Systems (GBAS), from being fully operational in Brazil and the South Atlantic regions. GBAS is a differential augmentation system designed to correct pseudo range errors on GPS signals in a vicinity of airports, enabling the execution of precision approach procedures based on the Performance Based Navigation (PBN) concept. It meets the stringent operational needs of aviation, is more economical than conventional ILS (Instrument Landing System), and has low installation, maintenance and lifecycle costs.

GBAS has tangible benefits for airlines and other aircraft operators, such as airport capacity gain of 9-12 departures per hour, reduced communications, improved PBN operations, fuel savings and automation of routine ATC functions. Enabling GBAS operations in Brazil would lead to better use of an airplane’s capacity. Boeing has around 15 percent of its GBAS-equipped customers in low latitude areas, indicating unused technological capabilities by airlines, aeronautical services providers and airports.

Boeing concluded extensive preliminary research on the ionosphere phenomena. The center acquired scintillation monitors (GPS receivers with special features) to collect ionospheric data in order to develop the calibration of statistical correction models. The monitors will be integrated in the Brazilian GPS network to obtain consistent data to enable the development of a Brazilian Ionosphere Disturbance Threat Model, which will be implemented in the GBAS stations in the future. It is also envisioned that flight tests will validate the model and certification process.

Efforts towards aircraft noise reduction are of paramount importance since noise regulations have become increasingly stringent to limit noise levels generated by aircraft. In recent decades, significant jet noise reduction has been achieved through the design of more efficient and quieter turbofan engines.

Since then, airframe noise associated with the unsteady turbulent flow around the aircraft has become a significant source of noise. Therefore, improving prediction techniques for airframe noise generation and propagation is a key topic in aeroacoustics research. Reduction of airframe noise is a complex task since its generation may be intrinsically related to the aircraft aerodynamic and structural performances. For example, landing gears, engines and slats noise may become a leading source of airframe noise on next generation transport aircraft. Designers are receptive to ideas to minimize noise.

Understanding the sources of noise can be derived from wind tunnel testing and flight testing but this is expensive. Computational approaches may offer a more economical approach to evaluate designs.

Collaborative research in Australia: Boeing Research & Technology-Australia has announced a research collaboration with the University of Queensland. The BR&T Brisbane office, laboratories and approximately 30 staff will relocate to UQ’s St. Lucia campus, enabling a deeper collaborating with students and researchers on topics including bioterrorism countermeasures, autonomous systems, unmanned aircraft, and environmental monitoring technologies. Boeing has been working with UQ since 2003, providing investments to support a variety of research projects such as sustainable fuel at UQ’s Australian Institute of Bioengineering and Nanotechnology.

Canadian lab focuses on data analytics: How can massive amounts of data be used to improve business? At Boeing‘s new open-concept laboratory in Vancouver, multi-disciplined teams with skills in UI/UX design, data science, consulting, and Agile software-development are leveraging skills and software to help solve the problem. The team is developing data analytics-driven solutions that help Boeing’s global customer base increase efficiencies and drive costs out of their businesses. The labs are designed to maximize creativity and collaboration in order to rapidly conceive, build and scale solutions, and also to network with other data analytics driven parts of Boeing and its family of companies.