The exponential growth in demand for wireless communications, both for civilian and military use, has created an urgent need to use as much of the increasingly scarce available radio frequency (RF) bandwidth as possible. This remaining available bandwidth is usually non-contiguous, time-varying and non-uniform in propagation characteristics.

The ideal would be to have a single physical radio that implements all existing communication signals and protocols (one radio that does it all), as well as one that adapts to new conditions to effectively use as many communications resources as possible, while still meeting applicable Federal Communications Commission and World Radio Conference requirements.

Software-defined radio (SDR) technology brings these benefits of flexibility and cost efficiency to end users. An SDR typically includes a collection of hardware and software technologies where some or all of the radio’s operating functions are implemented through modifiable software or firmware running on devices including field programmable gate arrays (FPGA), digital signal processors (DSP), general purpose processors (GPP), programmable System on Chip (SoC) and other application specific programmable processors. This allows new wireless features and capabilities to be added to existing SDR systems without requiring new hardware.

Software-defined radios typically use a set of fixed modulation waveforms for a fixed set of channel band-widths and choose among them to meet their operational goals. For example, when a set of non-contiguous channels become available, the SDR chooses one signal from this fixed set for each empty channel that matches that particular channel’s conditions (maximum energy, bandwidth, noise, channel characteristics, etc.). There are drawbacks to this method.

First, the fixed modulation waveforms do not exactly match each channel and so must be chosen conservatively so that all channel conditions are met (especially conditions that define the maximum signal leakage into adjacent channels). This mismatch leads to lower performance.

Second, coding is typically done only within each channel, rather than across channels. This leads to worse performance for certain channels when they are affected by worsening channel impairment over time.

Third, each channel must do its own synchronization (symbol, bit and frame, for example) because each is handled independently. This increases the complexity of the receiver because of the requirement for separate independent real-time parallel signal processing.

This paper describes a way to operate typical SDR systems through the on-demand custom design of modulation waveforms for communication on nearly any available spectrum under an unlimited set of operational conditions.

In summary, the technical paper describes the concept of on-demand designed waveform generation and an approach to implement this concept in both standard and specialized software-defined radio architectures.

This waveform method creates a single modulation function across the likely non-contiguous available spectrum with near-optimal synchronization and correlation properties and with near-optimal bandwidth efficiency. Because of its designed structure, this modulation waveform can increase the bit-error rate performance and/or range of almost any existing wideband SDR, while increasing robust performance under varying channel conditions. In addition, an SDR designed using the new hardware architecture described in this paper has a simpler structure than a traditional set of parallel digital modems, thus simplifying its design.

Many applications of our approach are possible for both the military and commercial communications. In the commercial arena, possible application areas include:

Future work is planned to address real-world performance metrics to compare on-demand waveform design with traditional modulation approaches in given SDR scenarios. This work could also compare competing approaches, such as orthogonal frequency-division multiplexing, to design waveforms for specific tasks such as spanning non-contiguous transmission bands. We also plan to address the computational requirements and latency in more detail, especially for embedded applications such as mobile radios, as well as coordination among radios using the proposed on-demand protocol.

Gary Ray is a Technical Fellow in Boeing Research & Technology, with more than 30 years in the field of communications and signal processing, including experience at Hughes Aircraft and Westinghouse Hanford. 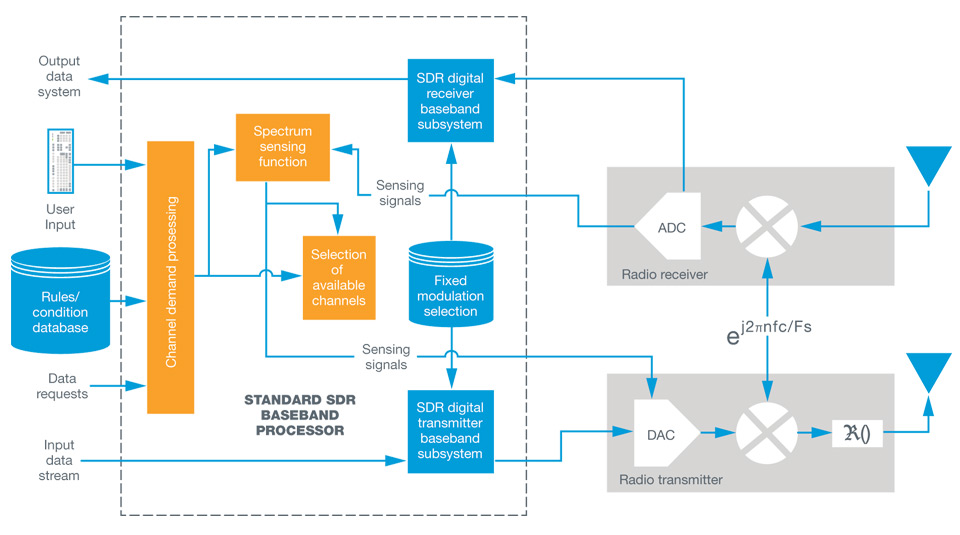 Adaptive radio is radio in which communications systems have a means of monitoring only their own performance and modifying their operating parameters to improve performance. This capability enables greater degrees of freedom in adaptation to changing conditions and to achieve higher levels of performance and better robustness for a communications link.

Cognitive radio is radio in which communication systems are aware of both their internal state and the communications environment. Therefore they can make decisions about their operation by mapping that information against predefined objectives such as the most efficient usage of available frequency spectrum.

Intelligent radio is cognitive radio that is capable of artificial intelligence, i.e., it is capable of automatically improving operation in the face of changes in environment and end user desires. All these concepts are typically implemented using SDR technology. 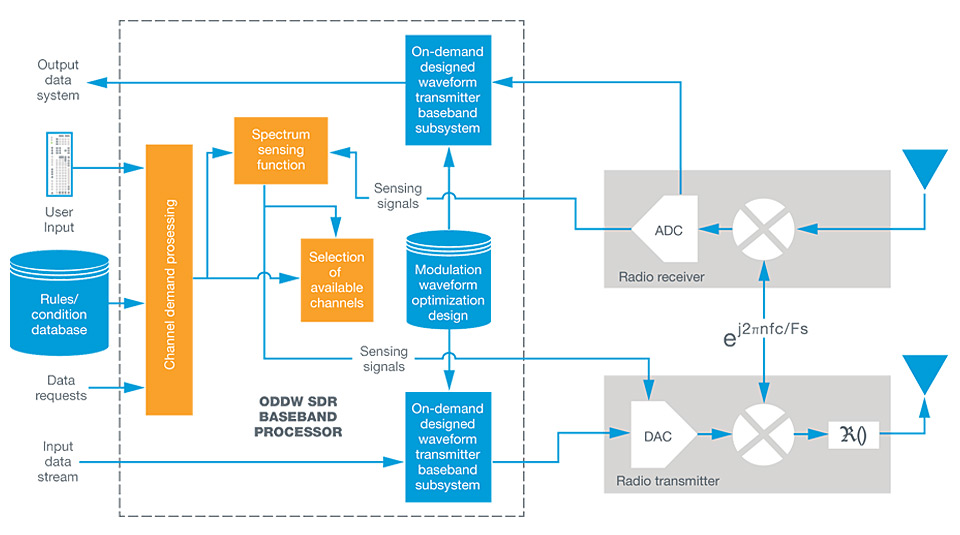 On-demand designed waveform: U.S. Patent number 9,325,545, granted to Boeing in 2016, describes a system and method for generating an on-demand modulation waveform for use in communications between radios.