Innovation and the disruption 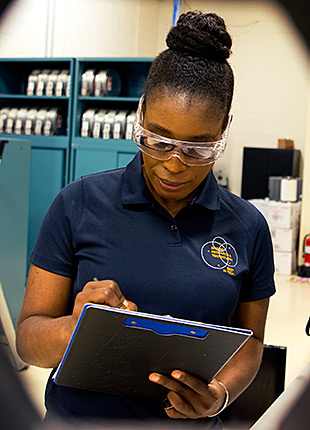 Through research and perseverance, a researcher pursues a technology that will revolutionize industries the world over.

Fatmata Barrie is a firm believer there’s always a solution if you’ve got a plan.

Like the time she went tandem skydiving in Alabama and the parachute malfunctioned. The backup chute worked just fine.

Or in Indonesia where she stared at multiple lanes of fast-moving traffic and wondered how she could possibly cross to a waiting taxi. The driver stepped into the street, put up a hand, and everyone stopped.

At Oak Ridge National Laboratory outside of Knoxville, Tennessee, Barrie, a Boeing metals expert, has a much different challenge: She seeks ways to use additive manufacturing, or 3D printing, to produce structurally critical parts for commercial jetliners. It’s a high-priority quest if not an ongoing trial for the aerospace industry.

Specifically, engineers such as Barrie are pursuing innovative processes in this production area that are repeatable and robust, that provide the same airplane part on the same machine over and over. This kind of commonality is necessary to gain Federal Aviation Administration certification to use the part.

“Honestly, my goal is to be an expert in this field,” Barrie said. “Being surrounded by people very knowledgeable in this field is ideal. I’m still learning.”

To many large companies, including Boeing, the recent innovation surge in additive manufacturing brings both enthusiasm and trepidation. The technology is widely recognized as a major worldwide industrial disruptor. On one hand, it has the power to dramatically decrease cost, enable greater design freedom and speed time to production—a great advantage for established businesses. On the other hand, the barrier to enter the industrial manufacturing market could practically disappear for newcomers.

Oak Ridge is home to complex supercomputers and powerful nuclear reactors and supported by the U.S. Department of Energy. It is a sprawling science and technology campus—the largest of its kind in the United States. Barrie works in the Manufacturing Demonstration Facility, a fairly new complex where she says “industry meets research.” Scientists, engineers, university professors and doctoral students surround her, sharing the latest knowledge and discoveries. Cutting-edge machines fill the building’s high bay.

In less than a decade, the United States has lost more than a third of its tool and die makers, and so the country imports 70 to 80 percent of the tools it uses. It is hoped that additive manufacturing can reverse or slow this development, said Bill Peter, Manufacturing Demonstration Facility director at Oak Ridge.

“Additive manufacturing is critical because we really need to spur on innovation for us to stay competitive as a country when we look at the future in manufacturing,” he said.

Conventional manufacturing might be viewed as uninteresting and a dirty process to the next engineers, but high school and college undergraduate and grad students have been drawn to additive manufacturing because of the automation and innovation, Peter added.

“It allows people to come up with great ideas,” he said. “They can go over and print and try things out. It’s made the younger generation get very excited about additive manufacturing.”

While additive manufacturing is not new to aerospace, producing larger and more structurally demanding commercial airplane parts through 3D printing would be a significant next step, said Peter Bocchini, a Boeing materials and process engineer in Huntsville, Alabama. A recognized expert in the field, he trades daily messages each day with Barrie on several projects.

“There’s definitely a lot of hurdles to overcome to mak it mainstream,” Bocchini said. “I think Fatmata is going to play a big part in making that happen.”

Barrie hails from Alexandria, Virginia. That’s where she first pursued engineering while attending T.C. Williams High School, which was depicted in the popular 2000 film “Remember the Titans.”

Barrie received undergraduate and master’s degrees in mechanical engineering from Carnegie Mellon University and Texas A&M University, respectively, and completed a doctorate in materials science and engineering at the University of Florida.

She studied shape memory alloys, which involves a deformed material reverting to its original form; and composite fracture toughness, examining the amount of energy that materials can absorb before breaking, such as an airplane wing. As a student, she received an internship in the auto industry at Ford and helped create a software tool that showed the efficiency of different operators in the factories.

Barrie also took breaks from the classroom and traveled extensively. In 2006, she visited Sierra Leone, the birthplace of her parents, to learn more about her cultural heritage. She presented her composites work in England and toured China through a university program.

Before joining Boeing, Barrie chose to go through Indonesia first. Receiving a Fulbright U.S. Student Program grant, she spent 13 months in the Southeast Asian nation learning the language and researching a commodity people there could use that was sustainable and cost effective—she studied bamboo and its ability to reinforce concrete.

Through the end of 2014, while doing her research at the Bandung Institute of Technology on the island of Java, Barrie determined that bamboo had more of a toughness to withstand cracks when cut into strips rather than used in its full form because of its geometry. She was pleasantly surprised by the outcome. She found that bamboo naturally replenished itself whereas other studies had shown that building materials, such as rebar, corroded and chipped away at the concrete over time in the form. Also, bamboo, as a construction resource, was plentiful to the region. Studies continue on whether to use bamboo in this manner, with a Brazilian group conducting further testing.

When she wasn’t conducting research, Barrie traveled throughout the South Pacific islands on planes, trains and buses to whet her appetite for new places and adventure. She went to see the Komodo dragon, the world’s largest lizard and native only to Indonesia, relying on stick-wielding guides to keep her safe.

“I wanted to do something non-Western to get a different perspective,” she said. “I wanted something different than what I was used to.”

In 2015, she joined Boeing and entered the metals and ceramics program in Huntsville. She worked on several projects, among them ICME, or Integrated Computational Materials Engineering. This involved using computers and modeling efforts to engineer materials.

Barrie studied the replacement of aluminum alloys with lighter compositions of the same material, specifically in airplane stringers, or strips that hold fuselage skin, for possible use in future airplanes.

She analyzed processing methods, researching the science behind them to see if changes could be made to make them more cost effective. She impressed Boeing colleagues with her educational credentials and her natural curiosity.

“She is like everyone else, in the sense that we’re all driven, but sometimes she comes up with questions that not everyone would think to ask,” said Karen Thacker, a metal, ceramics and metal parts engineer in Huntsville who has worked on various projects with and mentored Barrie. “That, I think, will serve her well.”

Barrie joined in an MAI project, or Metals Affordability Initiative. Working on modeling of forged titanium, she was asked to analyze wire feed samples, where wire was melted and deposited continuously, layer-by-layer, to build up a titanium part. She tested the titanium for its hardness and evaluated the microstructure of the material. After work from other Boeing engineers, the FAA later approved its use to build an airplane.

This led Barrie from Huntsville to Knoxville, cities that are three hours apart by car, and to Oak Ridge and the evolving world of additive manufacturing.

“It’s like a playground for a metallurgist,” Bocchini said.

At the national lab, Barrie works on different projects across the Boeing enterprise. She interacts with the scientists on site. She confers with aerospace suppliers. She can usually find an answer to any technology question somewhere on campus.

“I’m making inroads,” Barrie said. “From the metal side of things, with my background, it would be really great to get to a point to make structurally critical parts with additive manufacturing. That would be ideal. It will take some time.”

Barrie focuses a lot of her attention on a powder bed additive manufacturing machine. The bed melts metal material with an electron beam and deposits and rakes powder into the resulting composition, which forms a part. She studies how the components react to each other, always seeking clues.

It’s an evolving process that requires close collaboration between Boeing and the Oak Ridge National Lab to make progress, and Barrie has been a smart fit, said Ryan Dehoff, Oak Ridge deposition science and technology group leader, who works closely with her.

“She has an incredible understanding of the technology, the current challenges the industry is facing in regard to additive implementation, and has guided the collaboration between the ORNL and Boeing to bridge the fundamental to applied sciences,” Dehoff said. “It is a great partnership.”