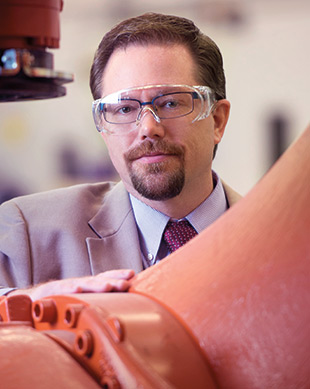 Q&A with Boeing’s Senior Technical Fellow for automation research and application on what lies beyond a quickly approaching production horizon.

Robots have operated in Boeing factories for years.  But the merger of autonomy and automation may lead to a cleaner, safer factory of the future for people.

Q. What is changing how industrial robots operate?

A. There is a lot of innovation and technology development in robotics that is on our roadmap. My big interest is in making robots and automation easier to integrate, deploy and use in complex manufacturing environments.

Today’s industrial robots are more or less programmed the same way they were in the ‘80s and ‘90s. The robot is taught how to do the automated operation either by directly moving the robot through the work, or by moving a virtual robot in a virtual factory. Either way, the resulting program is a list of steps and motions that the robot repeats in strict sequence. This works great if what you have is a simple set of actions that need to be repeated over-and-over in an environment that never changes. However, if you ever have to change the plan, motions, actions, or anything else, it requires robot programmers to create and test new instructions.

Contrast that with technology like autonomous flight or self-driving cars. The vehicle knows about the general operating environment, and how the system performs. From this, it decides how best to go about accomplishing the goals it has been given, and then adjusts to the changing environment it encounters. For example, you might tell your self-driving car to take you to the movies. It then determines the best route to take, does all of the navigation, traffic management, reacting to lights and signs, and re-routing as needed on its own. And it does this planning continuously in the background, adjusting the plan to the conditions encountered.

We are working on bringing similar technology to industrial robotics. While the long-term vision may still be a few years away, we are working to continuously deploy the technology into the factory as it becomes mature.

Q. How do you envision an aerospace factory of the future? Will work or tasks be eliminated?

A. I see automation changing the way work is done, rather than eliminating work or tasks.

In automation, we often talk about the “3 Ds”: dangerous, dull, and dirty. Those are the jobs where automation typically excels. Automating dangerous jobs helps us create factories that are safer for everyone and moves us closer to our goal of an incident and injury free workplace.

Automating the “dull” parts frees up people’s minds to focus on finding, fixing, and preventing problems. Work that doesn’t take advantage of the creativity and problem solving of the human brain is a waste of our teammates’ talents.

We want everyone to be fully engaged in the work they do solving problems as they arise. Looking at what jobs are “dirty” helps us think about places where automation will improve the overall work environment, changing the work to something people want to do rather than struggle through.

I like to add a fourth “D”—low dexterity. There is a lot of work in Boeing factories that requires a person to manipulate complex, flexible objects in ways that robots simply cannot mimic. For example, it’s really difficult for a robot to tie a knot, or thread a needle. That level of fine, dexterous manipulation is still best suited for people, not robots.

Q. Is it safe for humans to work alongside robots? What safety measures have been implemented?

A. An automated aerospace factory wouldn’t be empty of people, rather it would be full of people that are doing what people are good at—solving problems, improving the process, and focusing their talent on safe, clean, and engaging work. People will use and interact with robots in ways that are natural and human-centered, rather than machine- or function-centered.

Industrial robots have historically been large powerful machines with limited situational awareness of the work space around them. Newer robots, however, have become more sophisticated enabling industry standards that allow collaborative operation. These systems monitor the safe-guarded space and use robots with advanced safety controls and sometimes power and force limited designs that are inherently safe to be around.

With that said, for any robotic system to operate safely, a risk assessment performed by an expert is required.

Q. What advancements have been made, and where are they being used?

A. We have an awesome team of automation experts around the world. We’ve successfully developed and deployed automation in the U.S., Canada, Australia and Europe.

Boeing recently deployed a robot in Australia that automatically plans its motion to do composite layup tool cleaning. Our team in Charleston has been working with the 777 fuselage automated upright build production engineering team to automatically generate programs for drilling the 777X fuselage directly from the MBE (model-based engineering). We have demonstrated reliable automated planning from MBE for nut running in limited access areas such as frames on the 787.