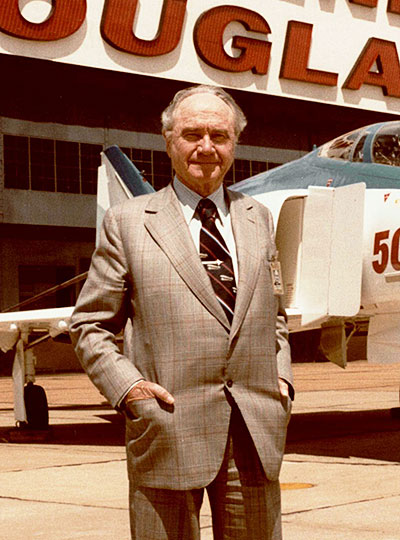 James Smith McDonnell was born in Denver April 9, 1899. He grew up in Little Rock, Arkansas, where his father, also named James McDonnell, was a successful cotton merchant and ran a general store.

Every morning before school, young James S. McDonnell delivered copies of the Arkansas Gazette on horseback. He graduated from Little Rock High School in 1917, just as World War I broke out. McDonnell served briefly as a private in the Army and then attended Princeton University, from which he graduated with honors in physics in 1921. While in college, he joined the Reserve Officers Training Corps.

After Princeton, he enrolled at the Massachusetts Institute of Technology for graduate studies in aeronautical engineering. While still at MIT, he continued his ROTC affiliation, passed the Army Air Service physical and passed much of the ground-school work required for pilots. In August 1923, McDonnell was commissioned as a second lieutenant in the Army Air Service Reserve and assigned to Brooks Field, Texas, for flight training. He graduated from MIT in 1925.

After earning his pilot's wings, McDonnell spent a year as a "gypsy pilot," doing odd jobs for people who owned airplanes.

Finally, he landed a job as aeronautical engineer and pilot with Huff-Daland Airplane Co. in Ogdensburg, New York. In 1928, McDonnell started his first company to build the single Doodlebug, but since it found no market, he spent the next 10 years working for several aircraft companies, finally as a chief engineer with the Glenn L. Martin Aircraft Co.

On June 30, 1934, he married Mary Elizabeth Finney, whose father, Dr. John Finney, was founder of the American College of Surgeons.

McDonnell resigned from Martin in 1938, determined to form his own company. On July 6, 1939, he incorporated the McDonnell Aircraft Corp. in St. Louis.

Within the next three decades, the company would become the leading producer of jet fighters and would build the first spacecraft to carry an American into orbit.

During his career, James Smith McDonnell received numerous awards and honorary degrees. His awards included the Robert Collier Trophy, the Guggenheim Medal, Founders Medal of the National Academy of Engineering and the NASA Public Service Award. He was remembered for his many civic duties, particularly his chairmanship of the United Nations Association of the United States. In 1958, the McDonnell Aircraft Corp. was the first organization in the world to celebrate United Nations Day as a paid holiday.