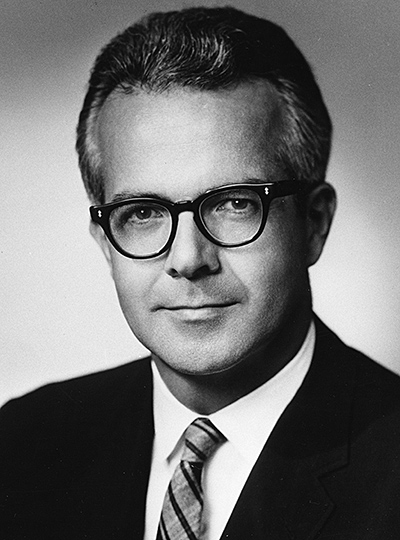 Sandy McDonnell, former chairman emeritus of McDonnell Douglas Corp., was a past chairman and chief executive officer of the company. He was a board member from 1967 to 1994.

Born in 1922 in Little Rock, Ark., Sandy was a nephew of McDonnell Aircraft founder James S. McDonnell. He earned a bachelor's degree in economics from Princeton University in 1945, another in mechanical engineering from the University of Colorado in 1948, and a master's degree in applied mechanics in 1954 from Washington University in St. Louis, Mo. He served in the U.S. Army during World War II, spending two years on the atomic bomb program in Los Alamos, N.M.

Sandy joined McDonnell Aircraft in 1948 as a stress engineer. He held a variety of positions of increasing responsibility and was involved in the development of the F-101 Voodoo and the F-4 Phantom II jet fighters. In 1962 he was named vice president-general manager of all combat aircraft, and in 1966 he was named president of McDonnell Aircraft.

He was elected president of McDonnell Douglas in 1971, chief executive officer in 1972, and chairman of the board in 1980. He also served on the board's executive committee and as chairman of the McDonnell Douglas Foundation. His focus on ethics led to the development of the company's Code of Ethics, Philosophy and Five Keys to Self-Renewal program. He retired as chairman in 1988.

Sandy was a fellow of the American Institute of Aeronautics and Astronautics and past chairman of the board of governors of the Aerospace Industries Association. He was also a national president of the Boy Scouts of America.

In 1984 he was named St. Louis Man of the Year, becoming the first son to follow his father in receiving the prestigious award. In 1967 his father, financier William A. McDonnell, and uncle, James S. McDonnell, were co-recipients of the honor. Sandy was involved in many local and national organizations focused on ethics and citizenship.

Sandy and his wife, Priscilla, had two children. Sandy died in 2012.