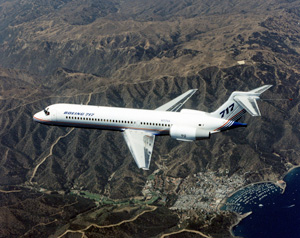 The Boeing 717-200 twinjet was specifically designed for the short-haul, high-frequency 100-passenger airline market.

The program was launched by an order from AirTran Airways in 1995, and the airplane quickly became renowned by customers for its excellent economics, performance and reliability.

Final assembly of the 717 took place the Long Beach, Calif., facility opened by Douglas Aircraft Co. in 1941 as part of President Roosevelt’s Arsenal of Democracy — a request to the nation’s industries to halt civilian production and assist in making wartime equipment. The facility produced almost 10,000 airplanes for World War II before transitioning to commercial airplane production after the war. Douglas merged with the McDonnell Aircraft Co. in 1967, forming the McDonnell Douglas Corp.

It entered a rigorous flight-test program in September 1998 and received joint certification a year later. It was the first commercial airplane to receive a Concurrent and Cooperative Certification from the U.S. Federal Aviation Administration (FAA) and Europe’s Joint Aviation Authorities (JAA). The FAA and JAA jointly certified the 717’s first major upgrade to the airplane’s flight control computer and flight management system in October 2000.

The launch customer, AirTran Airways of Orlando, Fla., took delivery of the first 717 in September 1999. Boeing built a total of 156 717s until production ended.

On May 23, 2006, Boeing delivered the final two 717s to Midwest Airlines and AirTran Airways in a ceremony before thousands of employees, retirees and dignitaries in Long Beach. The deliveries concluded commercial airplane production in Southern California that began in the 1920s with Douglas Aircraft Co. More than 15,000 airplanes had been produced in the Long Beach factory.