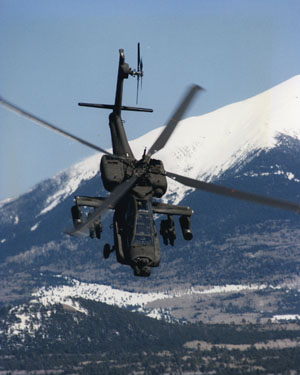 The AH-64 Apache was designed to be an extremely tough survivor under combat. The prototype Apache made its first flight in 1975 as the YAH-64, and in 1976, Hughes received a full-scale development contract. In 1982, the Army approved the program, now known as AH-64A Apache, for production. Deliveries began from the McDonnell Douglas plant at Mesa, Ariz., in 1984 — the year Hughes Helicopters became part of McDonnell Douglas.

A target acquisition and designation sight/pilot night-vision sensor and other advanced technologies added to its effectiveness in the ground support role. To reduce costs and simplify logistics, the Apache used the same T700 engines as the Army’s Sikorsky UH-60 Black Hawk utility helicopter and its naval cousin, the SH-60 Seahawk.

Highly maneuverable and heavily armed, the combat-proven Apache helicopter is the backbone of the U.S. Army’s all-weather, ground-support capability. The AH-64D Apache Longbow, which first flew as a prototype on May 14, 1992, provided a quantum leap in capability over the AH-64A. The Apache Longbow’s fire-control radar and advanced avionics suite gave combat pilots the ability to rapidly detect, classify, prioritize, and engage stationary or moving enemy targets at standoff ranges in nearly all weather conditions. There is also an international Apache export version.

Over the years, the Apache has been enhanced with advanced technology to make the helicopter more survivable, deployable and easier to maintain. The AH-64 Apache is the most advanced multirole combat helicopter for the U.S. Army and a growing number of international defense forces.

In 2012, Boeing also received all-new fuselages for the first AH-64E helicopters, incorporating a variety of small but important modifications to accommodate AH-64E configuration changes, such as enhancements to the extended forward avionics bays and slots for new electronics. More than 100 AH-64Es had been produced as of October 2014.