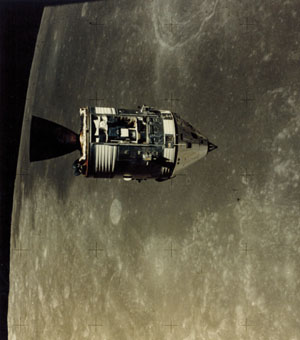 The Apollo program sent nine expeditions to the moon between 1969 and 1972. Six succeeded in landing a total of 12 astronauts. Two early flights were for reconnaissance in lunar orbit, and one landing mission, Apollo 13, was aborted after an oxygen tank exploded. The crippled vessel flew around the moon and returned safely with its photographs.

The program began after Russia successfully sent Sputnik, the Earth's first artificial satellite, into orbit on Oct. 4, 1957, and the Western world scurried into a competitive frenzy.

By April 1958, Congress was studying 29 different bills and resolutions dealing with space, spread between all three branches of the services, all with different plans. President Dwight Eisenhower finally harnessed the chaos by establishing a single space agency, the National Aeronautics and Space Administration, formerly the National Advisory Committee on Aeronautics. NASA then outlined specifications for the Apollo program — the U.S. entry in the race to the moon.

Robert Rowe Gilruth, NASA director, Manned Spacecraft Center, said one fundamental requirement for mission success was employing "the kind of people who will not permit it to fail." The basic reliability philosophy, he said, was "that every manned spacecraft that leaves the earth ... shall represent the best that dedicated and inspired men can create. We cannot ask for more; we dare not settle for less."

The Apollo command and service modules were built at North American Aviation's plant at Downey, California. The many things that could doom the crew made ground testing all the more important, so the company built a 150-foot-high Impact Test Facility. It looked like a gigantic playground swing and checked the module's structural integrity and impact loads by drop-testing it on water, sand, gravel and boulders.

Boeing sent the Lunar Orbiter to take pictures of the moon's surface before the first landing mission, built the first stage of the Saturn V launch vehicle, integrated the assembly of all three stages of Saturn V and provided astronauts with the Lunar Roving Vehicle. McDonnell Douglas built the Saturn V's third stage. North American Rockwell designed and built the Saturn V second stage and the command and service modules.

On Jan. 27, 1967, astronauts Gus Grissom, Ed White and Roger Chaffee died in a fire in the command module while preparing for the first crewed Apollo flight. The tragedy triggered an exhaustive investigation of NASA's Project Apollo procedures. The government approached the aerospace industry to solve the problem.

Because good communications were crucial to the space project, Boeing worked with Xerox, the Bell System, American Telephone and Telegraph, and Western Union to establish the Blue Teleservice Network, a dedicated system linking key managers at NASA facilities with Boeing in Seattle by telephone, telegraph, radio and high-speed data fax. Central communications rooms were set up at each NASA facility for teleconferences.

George Stoner is still remembered as a visionary. Robert Brock, 1984 vice president of the Boeing Space division, told an interviewer that during the early 1960s, Stoner talked about IBM computers, how people would fly to other planets, and how computers would become much, much smaller and would "operate with much more high speed." Stoner also encouraged research into advanced global communications, global navigation systems and environmental data gathering by way of satellites — long before these became commonplace.

The TIE personnel, under his guidance, ensured that everything worked with everything else and daily monitored millions of pieces of hardware so that the myriad components of the spacecraft were in perfect working order. They saw that contracts were met and were on schedule. Apollo TIE lasted until 1970, when NASA took it over.