The B-2 stealth bomber, with its unique flying wing configuration and low-observable, radar-evading, or “stealth,” technology is a versatile multi-role bomber, capable of delivering both nuclear and conventional munitions. The sleek structure is reminiscent of the B-35, developed by Northrop during the 1940s, and uses advanced composites, such as resin-impregnated graphite fiber, rather than metal.

As part of an industry team led by Northrop, Boeing built the outboard portion of the B-2 stealth bomber wing, the aft center fuselage section, landing gears, fuel system and weapons delivery system. At its peak in 1991, the B-2 was the largest military program at Boeing, employing about 10,000 people. The same year, the National Aeronautic Association of the U.S.A. awarded the B-2 design team the Collier Trophy for the greatest achievement in aeronautics or astronautics in America, as demonstrated in actual use. 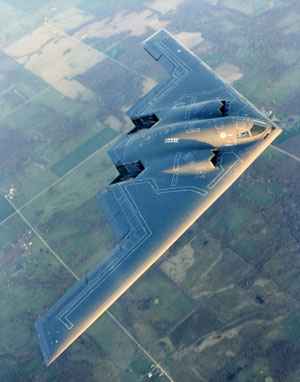