The Boeing B-9 bomber was the earliest plane based on the advanced, extremely aerodynamic Monomail design of 1930 that made traditional biplane construction obsolete.

Boeing built the YB-9 prototype bombers at company expense to show their design potential to the military. The B-9 is recognized as a revolution in bomber design, introducing new structures and aerodynamic concepts including the first use of a servo tab on an American airplane. Unfortunately for Boeing, this high-speed aircraft inspired the Glenn L. Martin Company to launch a new generation of bombers, resulting in the B-10, which quickly surpassed the B-9. 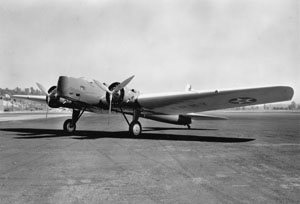