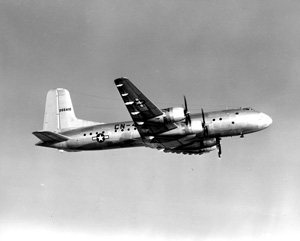 Beginning in early 1942, Douglas began development of the C-74 Globemaster I. This large four-engine transport would meet the need for an aircraft that could support the demands of a global logistics network with larger payload and transoceanic range. In July of that year, a contract was awarded to Douglas to build 50 of the giant planes. Development took longer than expected, and the first aircraft did not fly until just after the end of the war. By that time the government was canceling or reducing all aircraft production, including the production run of the C-74, which was reduced to just 14 aircraft.

Called Globemaster because of its ability to circumnavigate the world with only two stops, the C-74 was designed for self-sufficiency. A combination of features enabled it to operate anywhere in the world, independent of any transportation network or facilities. Self-contained electrical power enabled the crew to change engines if needed and to load cargo using internal cranes and freight elevators that lifted cargo to and from the ground.

The C-74 featured a laminar-flow wing and full-span Fowler flaps. One of its strangest features was the twin bubble canopies. The separate canopies made communication and cooperation between the pilot and copilot difficult; a conventional cockpit would later be retrofitted.

During its short career, the C-74 participated in the Berlin Airlift, set a record for being the first aircraft to cross the North Atlantic with more than 100 passengers, and was flown at a gross weight of 86 tons — the most weight for any powered aircraft up to that time. The fifth Globemaster had the distinction of being the prototype for the plane that would replace the C-74: the C-124 Globemaster II.