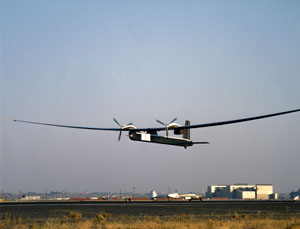 The Condor was a revolutionary aircraft built entirely of all-bonded composite materials, designed for remote-controlled, high-altitude, long-endurance missions. During its 141-hour flight test program in 1988 and 1989, it set several records for piston-powered aircraft by reaching a top altitude of 67,028 feet (20,430 meters) and staying aloft for nearly two and one-half days.

The Condor could provide rapid response and continuous, unmanned, wide-area coverage for days. Unlike other remotely piloted air vehicles of its era, the entire flight from takeoff through landing could be preprogrammed. Once it was airborne, its flight path could also be modified via communications links with ground controllers.

According to its engineers, it did not achieve its full potential during testing. They claimed it could have flown more than 23,000 miles (37,000 kilometers), remained airborne for longer than a week and reached an altitude of 73,000 feet (22,250 meters).

Originally, the Condor was intended for both military and commercial purposes; however, it could not find a customer. Because of its large size, slow speed and lack of stealth, it was too vulnerable to be used for military operations. It had tremendous civilian potential for weather monitoring and atmospheric research, but at the time the expense of such a vehicle was beyond the budgets of most civilian agencies.