The Douglas DB-7/A-20 Havoc was the most-produced attack bomber during World War II. A total of 7,477 DB-7/A-20s were built, most at Douglas, although 380 were built at the Boeing plant in Seattle, Wash. The Havoc was a mid-wing, twin-engine, three-place medium bomber that earned a reputation for getting its crews home, even when both crew and aircraft suffered crippling blows. It was called the “Boston” when in service with England’s Royal Air Force.

It entered production when, despite official neutrality in 1938, there was little doubt in the United States that the country should support its allies, Britain and France. The French saw the secret bomber project at the Douglas Santa Monica, Calif., facility and ordered the first 107 DB-7s; they were to be delivered to the French Purchasing Commission at Santa Monica starting in October, with deliveries made by ship to Casablanca. The French then ordered another 270 DB-7s. Before the fall of France in June 1940, half had been accepted, but many were still en route. Sixteen had been diverted to Belgium’s Aviation Militaire.

The United Kingdom took over 162 of the DB-7s intended for France as well as Belgium, which also had fallen. By the time the United States entered World War II at the end of 1941, British Havocs and Bostons had already performed well for most of the year against German targets in North Africa and Europe. The U.S. Army Air Corps designated the plane the A-20 Havoc, and it served in every theater of the war.

More than half of the DB-7/A-20s built went into service in other countries, predominantly the Soviet Union. Versions also included the F-3 photoreconnaissance aircraft and the P-70 night fighter. 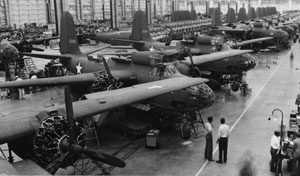