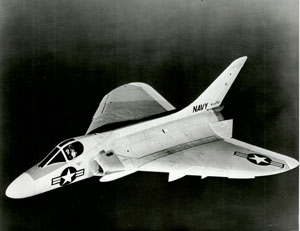 The single-place Douglas Skyray was named after the undersea manta ray it resembled. It was on the leading edge of aircraft design, could climb to 40,000 feet (12,000 meters) in two minutes and reach Mach 1 during a dive.

Analysis of data captured in Germany after World War II indicated that the delta-shaped wing would take the most advantage of jet propulsion for fast-climbing interceptor fighters. In 1948, Douglas signed a contract to build the F4D-1. Nicknamed "the 10-minute killer," the Skyray broke five world time-to-height records. In 1953, the Skyray was co-winner with North American's Super Sabre of the prestigious Collier Trophy.

In 1957 and 1958, a Skyray-equipped squadron was named the top interceptor squadron in the North American Air Defense Command, although it was the only Navy unit assigned to the Air Force-dominated command.

Douglas built 421 Skyrays, including two prototypes, and they continued to roll out of the El Segundo, Calif., plant until December 1958. After 1962, it was designated the F-6A and served Marine and Navy carrier squadrons until February 1964. An improved version, the "Super-Skyray," was named the F5D Skylancer but never went into production. The four prototype Skylancers were delivered to NASA, where they contributed to the development of a variety of products, including the Gemini escape system and the space shuttle.