The Douglas/Northrop Gamma was a sleek, all-metal aircraft that led to a series of military light-attack airplanes. John K. Northrop, who had worked at Douglas from 1920 to 1927, returned to design and build six Gammas between 1932 and 1937, followed by 12 Deltas. A second batch of Gammas was built from 1934 to 1936. Of the 61 Gammas built, 49 were produced for the Chinese and others were custom built for private owners, including the Texas Company (later Texaco).

The Gamma 2B, named Polar Star, was delivered to polar explorer Lincoln Ellsworth Nov. 29, 1932, for a flight across the Antarctic. Skis replaced the main and tail wheels, and twin floats replaced the main undercarriage. In 1935, Polar Star was the first airplane to cross the Antarctic continent, mapping islands, fjords and mountain peaks. Piloted by Herbert Hollick-Kenyon, with Ellsworth, it flew 2,400 miles (3862 kilometers), sometimes at as high as 33,000 feet (10,058 meters). Polar Star now rests in the Smithsonian’s National Air and Space Museum.

The Gamma was the second in the series of all-metal airplanes designed by Jack Northrop. The first was the Alpha that Northrop developed when his research company was bought by United Aircraft and Transportation, the holding company controlling all the Boeing enterprises in 1930. The Alpha carried passengers in an enclosed cabin, along with 465 pounds (209 kilograms) of mail — but the pilot still sat outside in an open cockpit. The Gamma and the third in the series, the Delta, had enclosed cockpits and were the first aircraft built at the El Segundo, Calif., plant.

Deltas flew for Swedish Air Lines and established a record flight between Paris and Stockholm at an average 198 mph (319 kph). However, after Oct. 1, 1934, only multiengine aircraft were allowed to carry passengers at night over rough terrain, so the Delta airplane lost some of its airline customers. 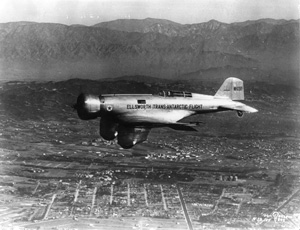